Home Music Benoît Delbecq & Jozef Dumoulin Plug and Pray: Evergreens
The very name of this duo – ‘Plug and Pray’ suggests a hard-wiring of the brain into the instruments only to leap into the unknown without the safety of a net and this is exactly what Benoît Delbecq and Jozef Dumoulin do not only on Evergreens but every time they set out to play. However, the suggestion (by association with the name of the duo) is that what you get is a sort of ‘luck-of-the-draw’ only because that’s what happens when these two improvising musicians leave it all to chance. However, that would be a very risqué assumption to make if you have not heard them play; not that it’s a calculated act, but it’s just that much goes into what is said, or sung.

When experimentalists stretch far out of any comfort-zone, into the proverbial ‘great unknown’, the music that results often sounds hypnotic, atmospheric and mystical. It can, however, also sound tedious and vacuous. Not so the music of Plug and Pray. For one thing Benoît Delbecq and Jozef Dumoulin embrace the concept of change with such vigour that there is forward momentum in everything they do. They, like the songs on Evergreens, are flux itself and the music is not ever ‘around’ long enough for tedium to set in anyway. 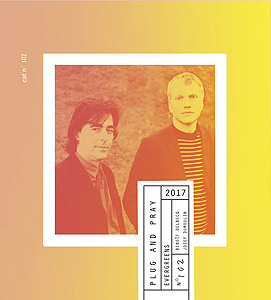 It’s almost as if the prophetic words of Eric Dolphy who said, “”When you hear music, after it’s over, it’s gone in the air. You can never capture it again” come to pass – again and again, and again…

Throughout the listening experience of Evergreens it is this very ‘ephemeral nature of all music’ indeed of all things that is being glorified. In some instances, such as “Singapore Rhapsody” and “The Zorro Bus” we feel compelled by music arising out of koans; in the nothingness of every dislocated or fading dissonance, are a sublime interconnectedness and a dreamy beauty that awakes in the music, gently roused by each musician. This is best observed when Benoît Delbecq manipulates the keys of his piano in endless harmony with Jozef Dumoulin’s Fender Rhodes. Each plays with deep gravitas as well as with quicksilver wit. Lively performances ensue – as in “Saint Denis Appetizer”.

These ten pieces mark the continuance of a partnership that strives to translate some of the dynamism, clarity and contrapuntal vigour of each musician’s work arriving at what can only be described as impressionist sensibilities in an utterly modern form. The music is constantly changing, dominated by edgy motor rhythms, followed by haunting slow movements whose spare scoring recalls musicians from John Coltrane to John Cage and beyond, in swirling rushes of energy from start to finish.