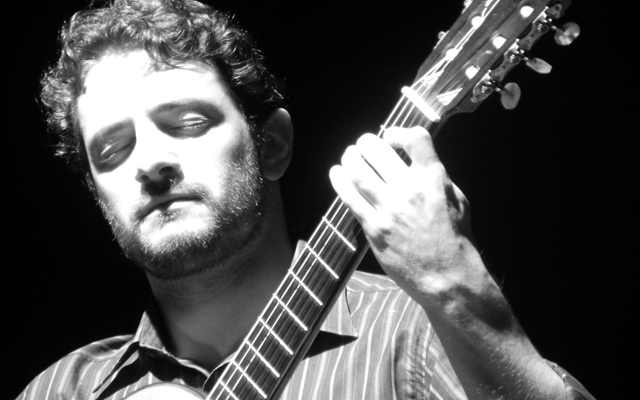 The guitar has a reach in social and genre terms unique among instruments, from the hostel backpacker chugging pop songs to concert-hall Bach; and Radamés Gnattali, as well. Vitor Garbelotto’s own recitals do not veer far from the concert hall. Although on each of the two albums he has released Garbelotto has played both – well, sort of; “Meu Amigo Radamés” on Sarau para Radamés and the staggeringly difficult modern fireworks of Gnattali’s “Dez Estudos para Violão” on Integral para Violão Solo. In both instances, and throughout both discs, Vitor Garbelotto seems to drive home the point explaining why it is so fiendishly difficult even for the great Brasilians to write well for the guitar.

It’s no secret that the intricate possibilities and limitations of four fingers, six strings and nineteen frets are mountainous in prospect. Easy-looking music on paper is actually impossible to play.

On the other hand, the guitar has a huge vocabulary of sounds and effects, combinable to make it sound as big as an ensemble – but which need each player’s insight to deploy effectively. They range from harmonics and pizzicato to technique exotica such as “nut-side”, “nail sizzle” or “bi-tone tapping” (plus a battery of percussion possibilities; every guitar comes with a drum attached). Hence the need for composers to work closely with players. The Brasilian landscape is unique in the entire world where this is concerned. Few countries continue to have harvest such a rich crop of guitarists – in every respect – far greater than all of the other South American countries and even in the pioneering Italy of Filippo Gragnani and in the Iberian Peninsula of Antonio de Torres Jurado and Fernando Sor. To the long history of Brasilian players of this fabled instrument, one must now add the name of a brilliant young virtuoso: Vitor Garbelotto.

There are many ways to make an uplifting album, but one that manages to convey its deeply personal sources of inspiration, while at the same time welcoming the listener into the music, is surely one of the most satisfying. So it is with this second outing for the monumentally talented Brasilian classical guitarist Vitor Garbelotto; the homage to Radamés Gnattali, Sarau para Radamés. Here is an album that offers pieces inspired by real-world ideas and the intellect, inextricably rooted in the concreteness of human existence.