Home Music Veryan Weston, Jean Martin & Christine Duncan: The Make Project
The great Ezra Pound, once asked about his poems, said that he made them “out of mouthfuls of air”. In The Make Project, by Veryan Weston, Jean Martin and Christine Duncan we not have those “mouthfuls of air”, but also the beautiful sound that goes with each intake and outbreath of the vocalists. Two of the principal ones are the exquisite voices of Felicity Williams and Alex Samaras, but in addition there is the proverbial “cast of thousands” in the form of the Hidden Meanings Voices and The Element Choir. If there is mystery and mystique in the very names of those choral groups, this is hugely enhanced by their singing too. All this, of course, is at the hands of the English pianist and composer Veryan Weston and his Canadian co-conspirators: drummer and percussion colourist Jean Martin and the axiomatic ring-master, Christine Duncan, who with balletic waves of her hands, literally gave shape to the lyrical vocalastics.

Over the years Mr Weston has created many-splendoured music with – among several iconic names – Lol Coxhill. But he will forever be remembered for his breathtaking (and ongoing) composition; “Tessellations” a work that has produced many recordings (try www.emanemdisc.com for a comprehensive list). The Make Project is centred on “Tessellations IV”. More precisely, of course, it is a recording on which Mr Weston extrapolates on his myriad layers of parabolic musical shapes by adding yet another layer: the one which comes from the word “make”, 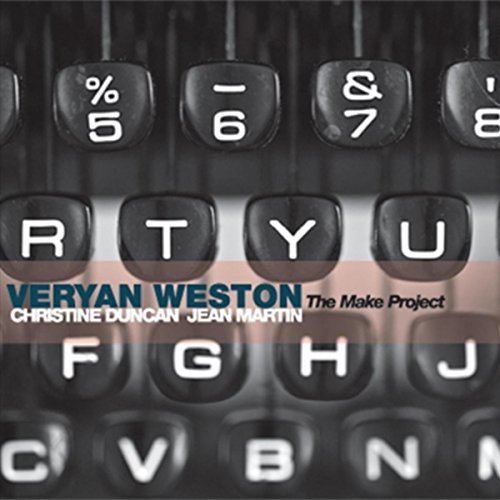 in turn an act that expounds upon the (Old English) idea of being a “maker” (or creator) of – in this case – music, by putting together sounds and words, ostensibly; in other words, using “materials that already exist” (from booklet notes ascribed to John Gibbons, English poet, 1959 – 2015).

Elsewhere Mr Weston tells us of his central idea. This is to break-up “Tessellations IV” into multiple pieces and all at once remake the work by layering fifty-two quotes from iconic writers’ works. But what is even more remarkable is that each becomes – with the vocalists, conducted by Christine Duncan – a plethora of minimalist “aria” (yes, such a thing is entirely possible as evidenced here) flowing one into the other, triggered by the word “make” in each literary episode or vignette. The effect is stunning; a sonic feast for the ears. Mr Weston together with Jean Martin and Christine Duncan, and the many vocalists led by Felicity Williams and Alex Samaras creates an (essential) mood of contemplation: unnamed, but sometimes suggested characters provide a sense of continuous narrative. All of this is communicated by music which bears intense meaning in every bar and its visionary quality in its evolution from darkness to light.

In his deployment of soloists and choruses, Mr Weston’s (and Miss Duncan’s) sense of timing and proportion is matchless, and the sheer physical pleasure of the sound is remarkable too as the work develops from two short pieces – namely “Hidden Meanings” and “Hidden Words” – into the full-blown “Tessellations IV” and its remarkable sound and scope. In the end, whether in the soloists’ voices or in the entire chorale everyone sounds as though they mean every word they are singing. Miss Williams and Mr Samaras are, as ever, outstanding, but serious kudos must also go to Miss Duncan who sculpts this sound (the heft of which is vocal) completely in keeping with the artistry and vision of its creator, Veryan Weston.