Home Music Roxy Coss: The Future is Female
Roxy Coss may have had her proverbial #metoo moment long before the release of The Future is Female. There is enough music out there to confirm that Miss Coss has been a force of the reeds and woodwinds for some time now. However, just to make it clear that everyone knows who she really is; Miss Coss has decided to let the feminist in her all hang out. The result sees her doing everything that a man in her place could do; only she does it not just as good, but – in many instances – much better than most. And she isn’t really doing this by your leave; she has never really needed anyone’s permission to have her say, but rather, it would appear, she’s beginning to sound that she is going to say it and “sing” it and “swing” it like the best of them – that is, musicians, particularly saxophonists, in the still male-dominated world of Jazz.

This recording The Future is Female comes hot on the heels of her last one, Chasing The Unicorn. The empowering message of this 2018 release is delivered in all its noir glory. The whole package has a Christopher Nolan-like perspective on the Gotham City; a far cry from the one that Bob Cane and Bill Finger created for DC Comics in 1939. Miss Coss is dressed in fatigues, which is in line with the militant message she is bringing. 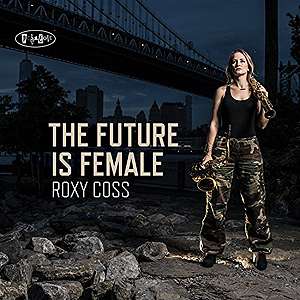 The imagery enhanced by photographer Desmond White, together with producer Marc Free and engineer Nick O’Toole seems also to me in line with the dark imagery of the music which is all Roxy Coss’ doing.

From the whisper-soft and breathy melody of “Choices” to the hard-edged blowing of her tenor on “Mr. President” and the even harder and sharper blade-like swishing of the lines in “Feminist AF” Miss Coss seems to have created the perfect crepuscular image. However, let’s not mistake all of this music for something that is soaking in a kind of androgynous, feminist imagery. For all the power of her saxophone and the rapier-sharp articulation with which she makes notes dance and sing as they take on a new life, leaping off the staved paper, Miss Coss still enunciates her notes with delicate roundness. Her lines are sculpted to mimic the stylish curves that also make women unique; never in a gratuitous way, of course, but there is no denying that her playing also conjures a delicate femininity – yes – even in “Nasty Women Grab Back”, with a melody exquisitely crafted and played on soprano saxophone.

It is also clear that the anger which is also something reflected in this recording and its dark sound is directed at the current scenario in the US which is being shepherded by a man who clearly has no respect for women. The mocking tone of “Mr. President” is calculated to berate him mightily. “Nasty Women Grab Back” makes reference to the same President’s suggestive remarks that were famously caught on tape. It is the firm albeit softly feminine response by Roxy Coss which is shines brightly on an otherwise dark recording; one executed with much beauty; a record to die for.