Home Music Danny Green Trio with Strings: One Day It Will

Danny Green is one of those pianists who would have made Debussy proud. This isn’t because he is the kind musician who is ideally suited to play Debussy or because this album, One Day It Will features his now-iconic trio with strings. But when Danny Green plays the piano you forget that the instrument has hammers. He has that kind of delicate, almost silken touch. And he has power too, which is how he is able to convey mighty flapping of wings in requisite passages during a particularly fiery crescendo in “As The Parrot Flies”, for example. And even here one gets a sense of the breathtaking silence of flight, even as the bird is fighting against the wind. It’s quite exquisite, but just one instance of the interminable gliding motions of slurs that seems to inform Mr Green’s pianism.

Another aspect of this recording is that we find Mr Green in his proverbial element as a writer who not only observes situations in the minutest of detail; his very visual writing also reveals that he is able to capture the passion of the moment and convey it in magnificent vignettes. Thus when you listen to the songs on One Day It Will you feel that a fire is being lit. Time after time, 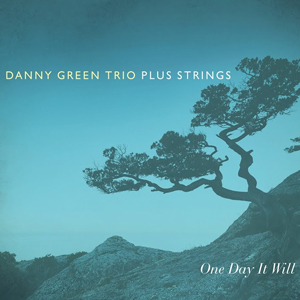 song after song the first bars announce that a spark has been applied – by piano, bass or drums; whoever has been assigned the task of playing the first notes – and this creates a flame that generates a dramatic heat, with strings pouring their own liquid fire in, you are completely swathed in the heat of the song’s all-embracing passion.

The trio of Mr Green, Justin Grinnell and Julien Cantelm, have been together – we are told in the brief liner notes – for eight years now. If it feels a lot longer than that it is because of the fact that they parley as old friends do, their empathy brought to fruition in the delicate manner in which each musician seems to weave his mellifluous playing in and out of the other’s in each of these songs. The arrangements for strings are sublime and playing them together the Danny Green Trio and strings bring an otherworldly beauty to each and every one of these melodies.

By gently cushioning their playing with bow strokes and sustaining double stops the strings bring infinite subtlety to songs such as “Snowy Day in Boston”. When this is melded in with the trio – usually by Mr Green – a “snatched” effect is deftly avoided unlike some accounts some similar, even distinguished accounts of music that attempts to weave an improvising group into a string ensemble. Even in the trickiest parts there is a flow from both trio and quartet no less pliant in their multiple voicings and exchanging of pseudo-contrapuntal thrust. The result is invariably an exultant sense of wonder that spills over into all of this music. It makes the album one to die for…