After her last album Trish Clowes may have been somewhat disparaged – albeit gently – for relying too much on the soprano saxophone. On Ninety Degree Gravity she seems to be saying, “Take that” not only by eschewing the use of the higher woodwind instrument, but also challenging critics to be quiet and listen to her challenging and inventive melodic, harmonic and rhythmic conception. As before she brings original material to the programme; further evidence of a curious mind backed up by an engrossing voice with a penchant for producing thought-provoking music characterised by inventive shifts in tempo that invariably propel her distinctive melodies into unusual territory. 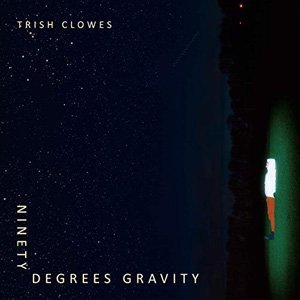 Everything about Ninety Degrees Gravity, this masterfully-crafted 2019 album, is presented – from the title down – at a spectacularly precarious angle. This means the music is completely unpredictable, swooping in and out of dissonances, minimal-like sounds and silences laced with monumental flurries of arpeggios punctuated by silences that arrest melodies as if they were thrown off bottomless precipices. The music of “Free to Fall”, a breathtaking song that includes a near-whispered vocal by the saxophonist followed by an airy instrumental segue suggestive of a breathtaking, free-falling musical expedition driven by the tenor saxophone and followed intermittently by the yowling Hammond B3 organ and filigreed guitar lines. All of this is punctuated by the rat-a-tat of a kind of drunken drum line evocative of something out of a soundtrack for a spectacular Ridley Scott film.

Immediately following, of course, Miss Clowes offers a delicious digression and diversion into a monumental pulseless song “Arise”. It is, of course, a tightly controlled piece with not a dead spot or blind alley to be found in it despite a seemingly aimless meandering wander around. Throughout, of course, the music is driven by Miss Clowes’ intimate, luminous, poetic and dry tenor lines swinging in tandem with the rest of her ensemble My Iris that comprises Chris Montague on guitar, Ross Stanley on Hammond organ and James Maddren on drums, all of whom are completely attuned to Miss Clowes’ vision and artistry.

The (once again whispered) voices including the children’s (including a baby’s) ones peppered with spritely laughter and seem to spring – this time around – right out of a Lewis Carroll fantasia which brings us the mysterious “I.F.” “Lightning Les”, a live performance is proof that Miss Clowes – who displays profound technical invention with breath-control and harmonics that dive deeep into the reserves of hers and her tenor saxophone’s soundworld – and her band My Iris are all just as vivid and mesmerising on stage as they are in the studio. The album ends (sadly, for it seems all too soon) with “Dustlings”, a kind of hypnotic bookend and coda to “Eric’s Tune”. Meanwhile we are once again awed by a musician whose composition and improvisation bristles with uncommon genius and can hardly wait for more…