It is doubtful if anything in Jazz will ever be more eagerly sought (and awaited, albeit, almost hopelessly) than the Holy Grail of Jazz: the legendary cylinder that Buddy Bolden recorded with his band. A very close second might be Mr Bolden’s music as interpreted by someone as close to its ephemeral heartbeat as Wynton Marsalis. With good reason. Mr Marsalis is a DNA match for what strikes one as the primal melancholy and unfettered joy of Jazz. Indeed there is also no horn player today as prodigiously gifted as him in terms of virtuosity and in the sheer depth of his scholarship and thus to interpret this music the world has come to love as Jazz. Of course it helps to have been literally born into the music first to one of the pre-eminent families of Jazz and that too in New Orleans.

Whatever little we know of Buddy Bolden came from a few people who knew him. One of those who did – trombonist Willy Cornish – also played with him and shared, we have been told, the style of his “new” and free-wheeling format of music made for mutual inspiration and joy. It’s evident success not only rubbed off onto those who evidently played with him, but also onto the generation who heard him and not only lived to tell it like it was, but also play it like it was. And if this music is to be believed, then it is a reflection of Buddy Bolden’s wit and warmth, whether delivering a rag or a Blues. His musicality is evoked by illuminating every phrase. His showmanship is brought back to life in its heat; the kind that burns through every melody. And Mr Marsalis lets it be known through his clarion lead in such classics as “Creole Blues” and “Funky Butt (I Thought I Heard Buddy Bolden Say)”, where he shares the warmth with Dr. Michael White and Wycliffe Gordon as Mr Bolden once did with Willy Warner and Willy Cornish respectively. 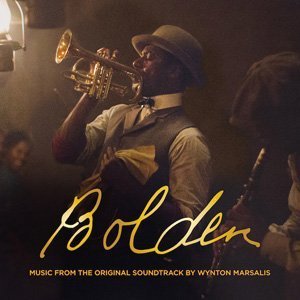 Too often we think of New York as the Mecca of Jazz. While that may be true for musicians and listeners because for largely commercial reasons it became imperative for musicians to strut their stuff there in order to be noticed and – as the club scene grew – it also became almost de rigueur to listen to music in that city in order to really experience it. But Storyville and Bourbon Street existed years before Birdland and so did Buddy Bolden, Jelly Roll Morton, King Oliver, Sidney Bechet and Louis Armstrong. Moreover if the hundreds of thousands of recordings and documents at the Smithsonian and The Library of Congress in Washington D.C. and The New Orleans Jazz and Heritage Festival isn’t going to remind us of the roots of African American culture, then perhaps films such as Bolden and – more importantly – its extraordinary soundtrack by Wynton Marsalis will do the job.

This music is timely because like life itself, it pays to be reminded where – and from whom – The Music comes from. There is enough anecdotal evidence to prove that no one played it better than Buddy Bolden as he fused ragtime into The Blues, inventing a new rhythmic and harmonic idiom that was fueled by the sound of the fabled Second Line marching band and provided the sonic atmosphere for parlours and flop-houses in which he played it as it came to be called Jazz. It’s not that no one plays it today. New Orleans echoes with this music even when the rest of the world sleeps. But somehow now is as good a time as any to celebrate one of the music’s most famous ghosts: Buddy Bolden. And once again, Mr Marsalis has proved that though anyone can (and ought to), no one does it better than his trumpet – and now, his cornet too.

Mr Marsalis is unique in all of music; an über genius who is, magically, proficient in contemporary music and the classics, and he has one of the most impressive recorded repertoires to prove that. From his musical pulpit at Jazz at Lincoln Center he has facilitated a veritable shrine to the music, calling the faithful to prayer and fellowship on many a night when he and a slew of other artists and preaching the gospel of Jazz to the rest of the world. But despite the fact that his recorded Jazz repertoire from the Standard Time Vol 1 (Columbia, 1986), {together with Intimacy Calling – Standard Time Vol 2 (Columbia, 1991) and Resolution of Romance – Standard Time Vol 3 (Columbia, 1990), and The Majesty of The Blues (Columbia, 1989), somehow, Bolden feels as if it is the “real” resolution of that whole series of recordings indeed of Mr. Marsalis’ evangelising music itself.