The raw and visceral music of the inimitable Charlotte Hug often sounds as if it has sprung into being from a point before or beyond the modern world, evoking elemental human or natural forces; also whether the stylized violence of Greek tragedy, the elemental cycles of the natural world or the destructive march of Time itself. Many of Miss Hug’s compositions – and she has contributed to a vast and dazzling panoply of work from vocal pieces, to works for viola (her other instrument), orchestra; even work in the realm of visual art – (each) possess the massive, rough-hewn quality of a prehistoric or timeless monument, though as her career has progressed she has also shown an increasing ability to tease out of the sound world music of spare lyrical beauty and, on occasion, haunting delicacy.

The often raging imagery of Miss Hug’s work – choruses of shrieking woodwind and madly plucked strings alternating with hushed interludes of intense abut muted lyricism – owes something to the example of Greek tragedy (the high-emotion of which comes in enormous waves), may have had a lasting impact on Miss Hug’s work (consciously or unconsciously) and it is this influence which seems to lurk in the shadows of the music of both these discs. Notes for Son-Icon Music, which Miss Hug has composed and which she conducts, references the Principles of Conduction style of Lawrence “Butch” Morris.

By the end of the music, though one gets the impression that she has transcended that ethos and with good reason: Miss Hug brings a molten; in fact a dynamic fluidity to the works and their performance because of the manner in which her compositional style – and the composition itself, with its visual element – is a ceaselessly moving image of a melting musical notation, the shape of which constantly seems to change and suggests a constantly changing sound world which is interpreted in the moment by the performers. 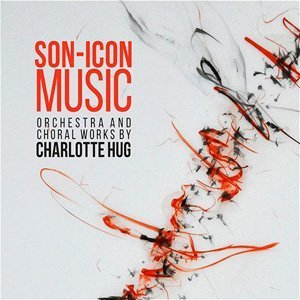 Charlotte Hug: Son-Icon Music The imaginary musical landscapes are broken up into several movements that suggest a monumental orchestral procession that mirrors the kind of macabre flowing ink in a work by Pieter Brueghel – expect that it isn’t. It is, in fact, a series of movements by Miss Hug in which the listener (at the preview during which it was recorded as well as in the listening room at home) is led slowly through ever-changing musical scenery, viewing the same landmarks from different constantly evolving perspectives. The experience is epic and geographical rather than merely musical; seemingly an approach to time typical of Miss Hug’s music, as is the works’ hauntingly sombre lyricism – powerfully muted at times, but rising at the centre of “Nachtplasmen”, for instance, to a vast and shattering climax.

The two musical signposts stand out in the constant flux of melodic fragments for orchestra and voices, reminding us of Miss Hug’s lyrical gifts, all the more moving for never being overindulged. Both orchestra and chorus here deliver performances of tremendous power – suitably fluid, yet monolithic, but never static. The vocal parts of the music of Son-Icons are particularly eloquent and in a strange way, even elegiac. 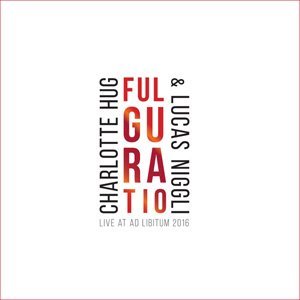 Charlotte Hug & Lucas Niggli: Fulguratio Charlotte Hug’s terrestrial – and extraterrestrial – sojourn continues through the exuberant duo showpiece Fulguratio with percussion colourist Lucas Niggli. As its title suggests the music takes its cue from physical and atmospheric phenomena – indeed becoming sprung from another kind of geological metaphor. Here, however, the music is formed from a series of different layers – or strata – that, in turn, spring from vocal, viola and Mr Niggli’s staggering array of drums and other percussion instruments. The shifting relationships of the instruments evoke the massive natural forces that shape the sound world. Sometimes the strata stack up immensely; at other times they thin to the most diaphanous textures; but always there is the sense of returning to the same point, only to discover that the viewpoint has changed in the interim.

On top of these seismic musical processes Miss Hug creates a virtuoso orchestral superstructure whose riotous details suggest the teeming surface life of the earth in all its protean variety. Throughout the five movements (or strata) Miss Hug and Mr Niggli tussle mightily and with aristocratic grit at all of the composer’s structures. In the ultimate analysis we are presented here with a benchmark rendering of improvised music; easily among the best work produced by both performers.