Home Music Trio Xolo: In Flower, In Song
In Flower, In Song – is the debut recording by the newly-constituted Xolo Trio, which comprises contrabassist Zachary Swanson, tenor saxophonist Derrick Michaels and Dalius Naujo, not the trio’s drummer but a percussion colourist to use a more appropriate description of what he brings to this music. 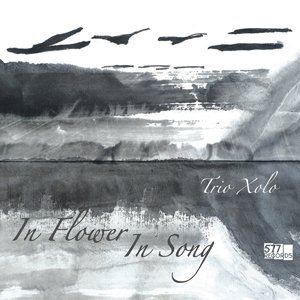 At the heart of this recording is the song that best describes what he trio’s creative intent is all about; that song is “A Mobius Strip”, which is a most appropriate way of naming the music clearly inspired by that most mysterious [even mystical] and maddeningly hypnotic, fluid [and oddly fixed] geometric form.

In the form and formless of this musical ellipsis lies the raison d’être not only of this recording, but of the ensemble’s very creative intent, and it is this: Trio Xolo purports to position itself in a musical alternative-sphere – a niche – and this clearly gives it a huge fire, born of a lot of passion about where there’s left to go – not so much in cerebral sense but rather more in an organic, musical one.

The musical palimpsest seems to come from one of those path-breaking trios that the great clarinetist and tenor saxophonist, Jimmy Giuffre leaps to mind – in particular, one that included the bassist Steve Swallow.

Trio Xolo is, here, [musically] at its best when it sounds almost “anti-establishment”, albeit taking a pressed leaf out – as much out of the wildly improvised book of late-John Coltrane [with Alice Coltrane, Rashied Ali, and others] as from the flying imagery of Mr Giuffre’s transcendent trios. There is, for instance, wave upon wave of brilliant three-way improvised conversations between the Xolo’s members.

This is the kind of “improvised” music that flows from a variety of ideas – where each of the musicians may initiate the flow by the time the others have given it voice that flow becomes a proverbial musical flood. Significantly, though the propulsions are most “songful” and therefore musical – beginning from a linear leitmotif, but soon developing into a soundworld all on its own.

Every work has a beginning and end, which casts every creation in its own “songful” world; though this is, in a sense, what a “song-form” is meant to be, nothing about this music is ever predictable… Never… Full stop… This makes the act of giving each piece a “working-title” a sense of mysterious daring. Careful listening is suggested in particular to “Ritualistic”, “Cropsey” and “Vantablack”. Is this an act of programmatic music?

The plot thickens when you open your mind’s ear, of course. This is when the music takes you to another world – one full of light and darkness, despair, hope… in other words, the music lights the way into the cavern of the human soul where every utterance is creative in an eminently musical, songful sense… And because of this sense of wonder it is with proverbial bated breath that we must await Trio Xolo’s next musical sojourn.