The inimitable Austrian composer and contrabassist Gina Schwarz is pre-eminent among the small [but growing?] number of women in popular music, from Europe and elsewhere, who have mastered the art of playing the lugubrious bass violin – the contrabass. Among the others are Meshell Ndegeocello [when she does play the contrabass], Mimi Jones, Esperanza Spaulding, Eva Kruse, Brandi Disterheft, Jodi Proznick, Linda May Oh Han, and Nicki Parrott [to name a few]. Some – like Miss Spaulding and Miss Parrott and Miss Disterheft also sing when playing.

But others – principally Miss Schwarz [and the contrabassists of the earlier generation] – prefer to focus on developing their virtuoso skill on their instrument. Miss Schwarz – in particular – often makes her instrument “sing” as she plays it, fusing the harmonic and the rhythmic [of say the great Charles Mingus, Oscar Pettiford and Dave Holland] often also with their melodic and almost vocalastic exploits [names such as Ray Brown, the Great Dane Niels-Henning Ørsted Pedersen and the altogether magnificent Glen Moore]. This fact – that Miss Schwarz melds multiple aspects of the musical elements in her composition and performance – puts her almost in a class of her own.

But there is much more to Miss Schwarz than artistry of the first order as a contrabassist. This refers to her excellence as a composer and adventurous arranger. Her willingness to push the proverbial envelope to the knife-edge of the table and her derring-do as an harmonic experimentalist greatly enhances her standing as an artist. The elegance and precision is often aroused by her fiery temperament. Always on the right side of chaos, she is as wont to display combustion as she is a cool attentive brain that keeps to the intention of compositional narratives and themes – often witty and sometimes bordering on delightfully unruly – as brilliantly displayed on the music of her 2022 recording Way to Blue.

Clearly Miss Schwarz is worthy of her place in the library of great Austrian music – especially for her large ensemble work – as is [or was] the work of the outstanding Vienna Art Orchestra. Founded by the incomparable Mathias Rüegg the VAO have a legacy of being one of the great large ensembles in Europe from the 1970’s onwards. Some of Mr Rüegg ‘s greatest achievements were From No Time to Ragtime [hat HUT, 1983], Blues for Brahms [Amadeo, 1989], The Original Charts (Of Duke Ellington & Charles Mingus) [Verve, 50th Anniversary, 1994] and with the Vienna Art Choir featuring George Lewis and Lauren Newton From no art to Mo(z)art [Moers Music, 1983].

Although Miss Schwarz’s arrival later on the Austrian music scene has meant a shorter discography than the VAO, she is every bit the equal – in drama, at any rate, if not in wit – as the incomparable Mr Rüegg. Lately, however, she has been able to combine a wry wit and drama in her work – to supersede the emotionally draining [and depressing] global pandemic – to generate uncommon and dazzling levels of energy and excitement in the three of her most recent recordings. Her compositions on these three sparkling recordings are superbly contained in exciting narratives, thematic development and gestures propelled by gorgeous, texture-conscious playing of her instrument. Her articulation is superb throughout, and it is one’s considered view that Miss Schwarz could hold her own with any of the iconic men [mentioned in the second paragraph of this feature] who have shaped the modern expression of and on the contrabass.

There is, on the brief solo on the song “Via Terra” [on the recording under review immediately below] where Miss Schwarz conveys almost in a choral manner, the instrument’s exquisite timbre through a broad range of octaves making the contrabass sing in a hyper-real-time – as an almost living being – notes that fly off the page. So vivid is the solo that augmented notes – whether leaning sharpwards of flatwords– and naturals are intoned with power, clarity and delicacy that they seem to come from a fabled inner world where brilliant colours proliferate in dazzling, elliptical lines. And now, onward to the promised reviews of the music… 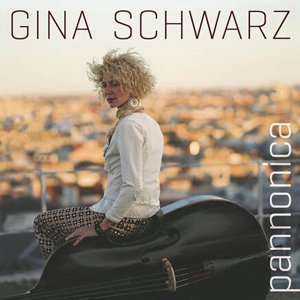 Gina Schwarz: Pannonica As the title of this substantial double recording suggests, it was inspired by the one of the greatest ever aficionados and Jazz-warriors – the Baroness Kathleen Annie Pannonica Rothschild de Koenigswarter. Friend [and often Muse] to Thelonious Monk, Horace Silver, and – of course – the great Charlie “Bird” Parker. The recording may also be construed as Miss Schwarz’s answer to the Baroness’ seminal book The Jazz Musician and her three wishes. In that sense, Miss Schwarz encourages her musicians to express their innermost selves, much as the Baroness got the musicians she interviewed for her book to reveal the three most heartfelt wishes in each of their lives.

The lavishly presented two-disc set is a treasure trove of performances – not only by Miss Schwarz, but of each of the performing musicians. The longer Disc One – entitled Musicbox presents what you might find as if in an archaeological dig; a newly-discovered jukebox of priceless music. The shorter Disc Two – is appropriately entitled Free Landscape suggesting the Miss Schwarz writes from a perspective that has pulled back from the micro – to the macro perspective of the musical soundscape to reveal – and encourage her ensemble to play as if they have revealed the inner workings of their own imaginations.

Each of the performers on the discs seems to have internalised completely the music – the vision and artistry – of their leader. They return the favour with idiomatically beautiful performances that seem to breathe fragrance into the music. This should come as no surprise as this ensemble comprises some of the finest readers – and interpreters – of contemporary music [much like those who people the VAO]. Meanwhile, it should come as no surprise that Miss Schwarz has a way of spinning off melodic, harmonic phrases like so much iridescent thread, her inflection and colour making her a thorn in the side of conventional wisdom. The solo piece – “Windmills” is a marvel of nuanced virtuosity.

For their part each of the musicians captures the elusive, evanescent magic of Miss Schwarz’s maddeningly brilliant and uncompromising music in the quirky and urbane, witty and delectable performances. Clearly they can play anything that may be both written and imagined well enough to arouse in one a sense of awe and wonder. While power and naturalness is at the centre of Miss Schwarz’s art, the whole edifice of this double disc is genuinely appealing; music-making at a level that most artists can only hope to acquire sometime late in the proverbial maturation of their musicianship, but which is consistently heard over the almost hour and a half of music. 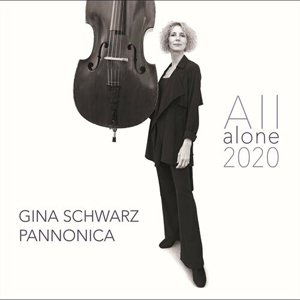 Gina Schwarz Pannonica: All Alone 2020 During the height of the global pandemic Gina Schwarz composed and was forced to workshop all of her new music – like artists all over the world – in the solitariness of social isolation. However, she appears to have created a magical repertoire and got buy-in from musicians she was separated from musicians now gathered in the ensemble Pannonica. This is music in which the composer conveys her vivid sense of acute loneliness with utterly natural anguish.

It is in this music – notably “Communication in Isolation” and the even more prescient “All Alone – Together in the Long Run” [the latter a-not-so-oblique reference the Arthur Schwartz and Howard Dietz 1939 noir classic “Alone Together”]. Also in the latter – as well as in much of this music – the music’s extremes of emotion grow from within the notes themselves rather than being applied from without. The wry sense of “Wistful Euphorism” and the disquieting edginess of “Farewell to Resignation” are very compelling and drenched in the kind of intensity that captures the dramatic tension that pervaded our lives throughout the viral pandemic.

In these works Miss Schwarz conveys the sense of disquiet that gripped the world, with authority and impeccable lucidity. Throughout the music she – together with her daughter and drummer Judith Schwarz set up a rhythmic wall upon which the rest of the ensemble cast their frayed melodic lines – perfectly reflecting the emotions of the earth in distress – to sound world-weary and yet becalmed. Rather than burst through with a proverbial nervous-breakdown, the brass and woodwinds – together with lonesome, wailing strings build up the tension gradually. This is utterly shattering.

The two bonus tracks “Duologue” and “Monologue” are masterly movements of Miss Schwarz’s complex and conflicting emotions. As finales to this recording they are lustrously shaded and endlessly subtly shaded; with tempo judged to a nicety as we enter into the desolate unfiltered inner “Schubert-like” world of the Miss Schwarz’s own personal “Winteriesse”. 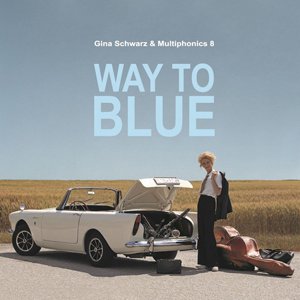 Gina Schwarz & Multiphonics 8: Way to Blue In keeping with the proverbial “dark” tone of voice that Gina Schwarz imparts to her instrument – and to her music – this recording also begins with rippling bass and drum groove experienced as a reflection of [this] darkness in shattered mirror. “Lost Time”, that propulsive opening to the recording immediately takes us into another world – a world that echoes with hopes and despair, joy and sorrows that are cast into a kind of Mendelssohnian scherzo that Miss Schwarz is ever so adept at creating. However, despite the pre-eminent presence of the contrabass and what certainly sounds like symphonic percussion colouring by the drummer – this time in the person of Dirk-Peter Kölsch.

This recording is, however, vastly different in its soundworld, its narratives, thematic and gestural approach. The predominance of bottom-heavy tonal registers of the woodwinds and the singular absence of brass – which would almost certainly added to the brightness of the tone-textures – enables Miss Schwarz to create a completely different soundscape. The poignant music which is born of the composer’s own nostalgia, which criss-crosses – and often runs parallel to one which the eminent British composer and singer inhabited in his relatively short life. Like Mr Drake’s world, one seems to be beckoned into a world that Miss Schwarz inhabits not dissimilar to this recording’s Muse.

The songs themselves are interspersed in a series of “inner conversations”. Each is a [numbered] “Chat” that Miss Schwarz seems to has, often on two levels – one, which is with her ensemble and the other with the ghosts from her own past and the other, which is with Mr Drake. Each of these conversations or “Chats” – is as often a lonely monologue, or may often involve multiple voices set in a contrapuntal conversation. Each also acts as a prelude to the forthcoming song performed in the shadow of theatrical and dark-sounding sound palette.

Miss Schwarz’s playing gives shadowy textures and bold, invigorating impetus to the melodies and harmonies played by the woodwinds and the piano. She always thinks big, phrasing in long surging spans of sculpted bass line melodies, imbuing her passagework with a powerful sense of direction. The piano, bass and drums drive the woodwinds [musicians listed below] passionately, even impetuously, forward, with minimal affectionate or elegiac lingering in each song’s lyrical theme. Soli are refreshingly brief and ungimmicky. Miss Schwarz’s gift for “big” thinking plays out beautifully- always at a brisk, no-nonsense tempo. All of this pays dividends in the majestic form of “Choral”, “Blue Sunbeam” and in the grand finale, “Looking for John”.

In many ways these arrangements recall the monumental ones that Eric Dolphy created when he worked with John Coltrane on the legendary Africa Brass sessions. However, there is no gratuitous idolatry here; just inspired compositions and arrangements on the part of the prodigiously gifted Miss Schwarz.