So the musician and alto saxophone virtuoso Benjamin Koppel had a gift for writing as well as music? It’s not difficult to discern this about one of the brightest young artistic minds on Denmark. Unsurprisingly he has, indeed poured all the light and dark of his imagination into his first his work of fiction [art imitating life more likely?]. Also unsurprisingly Anna’s Dollhouse is a work so lyrical – with a storyline delicately woven in a gossamer sort of way – and so intense in this composition Mr Koppel appears to have written it in “the language of emotion…” as Tolstoy might have put it,. 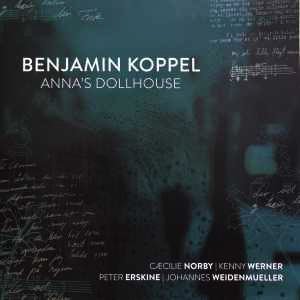 Moreover – and also unsurprisingly – Mr Koppel found the perfect voice to bring “words” of this emotional narrative to life: the voice of the inimitable Cæcilie Norby. Miss Norby has musical pedigree that few artists anywhere in the world have. Her father, Erik Norby, is classical composer and her mother, Solveig Lumholt, is an opera singer. But the art of the daughter rises to a realm much beyond the rafters to a place where Anna’s words – often whispered as they uncoil and whip around and out of Anna’s Dollhouse only to take wing and float with the aroma of evanescent incense to a place of the imagination beyond the clouds.

Such hyperbole may have sounded somewhat suspect. But that proverbial script is instantly flipped when put this disc into the tray of your CD player. And you’d better have an audiophile system, because the luscious recording by Thomas Vang is polished to a gleaming gem by Lars Nissen. The narrative of the masterful novel’s imaginative world becomes an act of courage for its protagonist – the young, impressionable Anna, who dreams of a world beyond the drudgery of life; a world where she can take flight as a musician. Mr Koppel becomes more than the proud musical voyeur who looks upon his creation; he participates in it with uncommon virtuosity.

The saxophonist plays his music as if he is waving a magic wand, urging the black dots to rise and fly off the written page. And fly they do – not only at his hands [and his breath that carries the melodies out of the bell of his horn], but his spell is cast upon Miss Norby. Her response to the literature enjoins her lustrous voice to the emotional fervour and lyrical eloquence of the words that she has written in response to Mr Koppel’s music and narrative power of his novel of the same name [Anna’s Dollhouse]. With the music speaking to her in the secret of her heart Miss Norby – with her gorgeous, high-sprung vocalastics, illuminates the poetry of the narrative – to animate Mr Koppel’s music.

Lest it seem that this is merely the effort of a duo, it must be said that Kenny Werner also pulls out the harmonic and rhythmic stops of his pianism to convey the extreme delicacy of the work. You will also experience the percussion colouristics of drummer extraordinaire Peter Erskine and [percussionist] Jacob Andersen as you may never have experienced before. Not only that, bassist Johannes Weidenmüller adds brush-strokes in the brilliant act of playing pizzicato. I would be remiss if I forgot to add that this wondrous score was fluffed out like a delicate and glowing flambé by the extraordinary string-arrangements of Anders Koppel. This is not only the epitomé of a musician’s magnum opus; it is a work to die for… [O how I wish I had a copy of the novel as well].