Home Music Theo Bleckmann: Elegy
There is considerable evidence on Elegy this ethereally beautiful recording (which of his isn’t) by Theo Bleckmann to suggest that he might be, for some, the modern-day Erdmann Neumeister. The poetry of his texts, combined with his soaring music suggest pieces seem inspired – and closely mimic – by the cantatas of Bach, whose sacred ones were based on Neumeister’s poetry. Bleckmann’s own pieces on Elegy (minus the recitatives and choruses) are like deeply-felt arias and chorales written in the legendary baroque tradition where his ecstatic meditation – often sent cascading into a spiritual realm – melts into the markedly contrapuntal voices of guitarist Ben Monder and pianist Shai Maestro.

These moist and giving performances emphasize the manner in which strands of polyphony move in and out of each other like living organisms. Theo Bleckmann sings in his now-familiar, his high notes mingling with subtly-layered vocal effect sand rapidly rising arpeggios by Shai Maestro create an elaborate fantasia around the pieces through various permutations of soloist and thematic material until Bleckmann reaches the final singing of the ‘chorale’ in which – instead of the congregation – the musicians 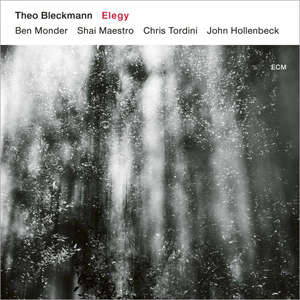 often accompanied by the rolling thunder of Chris Tordini’s bass and John Hollenbeck’s drums as they join in to lift Theo Bleckmann and his voice, and their music heavenward.

In fact it might be safe to regard the entire entity of Elegy as a large scale work featuring several near-sacred (“Elegy”, “Cortège” and “Take My Life”) miniatures into the overall scheme of the combined work which also includes pieces of a secular nature such as “Comedy Tonight”. Combined as a whole and offered, as it were “To Be Shown to Monks at a Certain Temple” the overall work builds a large and magnificent edifice around it while we (the listeners) are witness to its glorious rising at every turn. A solo piano in “Elegy” magically interweaves itself around the vocal line in the yearning of its own melisma, a characteristic device used later by Theo Bleckmann, for guitar, bass and drums.

The penultimate “Take My Life” works like an aria closing in pon the afterlife, a gentle reassuring lullaby in which the singer arrives at a joyous welcoming of death. The following two pieces “Wither” and “Alate” lend an air – slightly heavy at first, in “Wither” then light and soaring in “Alate” amidst imagery of acolytes ascending with the soul into heaven. His voice seemingly coming from the sunlit nave of a baroque cathedral, Theo Bleckmann pours every ounce of emotion with heartfelt intensity into this, his defining work. Few singers can convey the naked emotion of art through an unforced shaping of vocal lines and with such eloquent restraint. establishing exactly t he right mixture of seriousness and joy.