Home Music Macy Gray: Stripped
Just in case we lose sight of the fact that Macy Gray began life as a singer in jazz clubs and bars, we have this reminder: Stripped with its ten songs ripped from the belly of the beast – life itself. Pulling no punches has always been Macy Gray’s raison d’être and she has imbued her music with a raw, visceral energy that has now become her beacon. It’s in the gnarled poetry pf her lyrics. It’s in the intoxicated rhythm of her music. It’s in the remarkable voice: raspy, sexy, lived-in, knowing and it’s hard to imagine her songs bettered by anyone as she takes us into their world of narratives, emotions and archetypes that inform her poetry as desire and ritual collide, men are loved, lost and mourned and vitality and depth jostle for supremacy.

In the end, of course, there is only one winner: Macy Gray. She emerges bruised and stripped, then whole again, walking away albeit with third-degree burns, but walking away, nevertheless from the fire that consumed everyone else but her. Then she begins to sing of what happened, low, almost in a gravely, whispering voice utterly mesmerising as she draws her breath as if sucking in the bitter potion like a syringe with a sense of hungry sensuality and percussive weight. 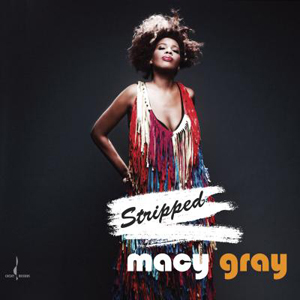 She cries the blues, the smouldering caustic of tears igniting a slow swing and then, seemingly from another world and another life, wrenches a Debussian aesthetic, bringing it into her world and into her songs.

In truth there is no perfect world, yet Macy Gray lives in a perfect one musically drawing from the imperfections of life. Her ‘day’ is also her ‘night’ in the darkness of the songs, her cries – little syllables underscoring an expression with an aching sigh at the end of a line that brings her scarred diamond to light, wrenched from the ground with formidable energy and commitment. “Redemption Song” is one of those diamonds in the rough, sung not with the triumph of Bob Marley’s original, but with doubt, and pain and then hope. She almost weeps with elemental agony in “I Try”, and in the pulsating rhythm of “The Heart” lies the purest of pain. Even in the Rabelaisian world of “Lucy” she seems to glow through its sultry sexuality rocking the rhythm with a deliberate tempo as she utters forbidden rhymes.

It is also a coup of sorts to bring together this quartet of Wallace Roney, Russell Malone, Ari Hoenig and Daryl Johns to ornament the vocals of Macy Gray through Stripped. Roney’s trumpet hugs Gray’s vocals wailing with her, and bringing its own smokiness to the music. Malone’s guitar announces the impending catharsis in bittersweet lines while Hoenig and Johns are gently urging, blunting the metronome, but gently pushing Macy Gray on to the inevitable end. All of this drama is magically captured in the transcendent acoustic of binaural sound by Chesky Records.

Track List: Annabelle; Sweet Baby; I Try; Slowly; She Ain’t Right For You; First Time; Nothing Else Matters; Redemption Song; The Heart; Lucy.