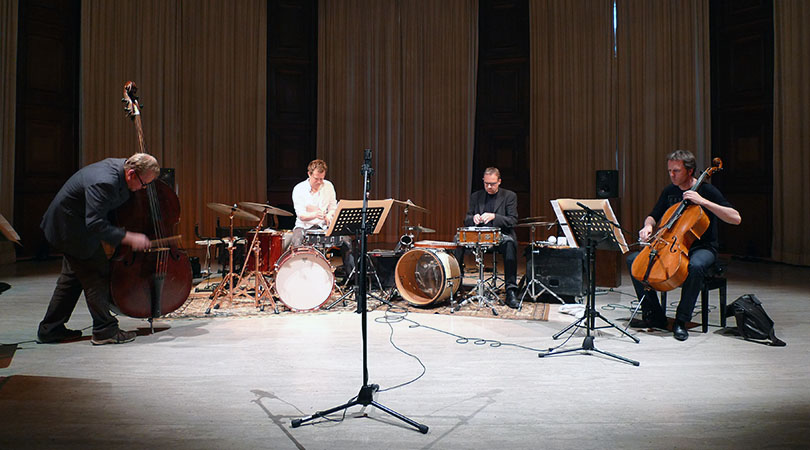 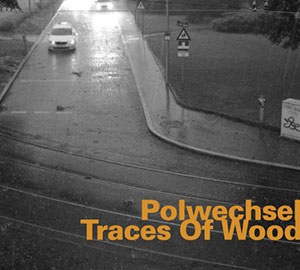 The music of Polwechsel lies at the intersection of surrealism, pop-art, wholly improvised and wholly programmatic music. Such a sonic landscape can only be enriched by its individual influences; an agglomeration of moving pictures and musical narratives that lie at the heart of a high and transcendental art. Traces of Wood suggests a visceral; an almost intuitive acoustical journey marked by tuned percussive elements with the bass and cello lines that act as the glue that holds it all together and often to create the dramatic effect that dazzles like a brilliant sun in a dense musical tapestry. There are melodic elements that inform the dramaturgy of the percussion and they are unlike anything that has been heard before. Rarely is there anything so loud and out of place that the percussionists appear to intrude on the inner landscape of the music; if anything, they are responsible for creating not simply a centering pulse, but also giving the music a tonal centre of gravity. The strings make the music come alive as if around the spectral heartbeat of the percussion.

The opening bars of “Adapt/Oppose” a single note, with its attendant overtones, played con arco creates monumental tension that expands and contracts throughout the music of the recording. However, here it is central to the musical narrative, which is heralded by the ringing of what sounds like a temple bell. The momentary release of the tension seems to be an invitation to the percussionists, to make the abstract imagery of the song come to life. The dramatic energy soon returns as the music penetrates deeper into spectral dimensions of the piece. Roughly halfway through the piece the raison d’être of the tension returns: this is a piece about the existential push and pull of life. The narration of this is ascribed once again to the bass and cello, although the depth bombs on the bass drum do describe all the more the urgency of the piece. This kind of kinetic propulsion apprises the next piece “Grain Bending #1,” which is also an exquisite composition made in an elemental graphic mode. The music is more evenly distributed among percussion and strings here as the intent is to ascribe a more graphic geometry to the architecture of the music. It is a credit to the musicians that the notion of horns and even a keyboard is suggested in the impulse of this mighty composition, not the least because of the bouncing of the bow upon the strings of the cello and the bass, as well as in the wondrous manner that the vibes are played.

It should come as no surprise that viscosity and a superb coloration is also part of this set for although percussion of various elements and intensity is how a majority of the music is expressed the palettes of the individual musicians are vast and varied. In “Nia Rain Circuit” the interaction between strings and tuned percussion is almost inseparable. Both contribute to a musical expedition that is surreal and expressionistic in a great clash of painterly styles. However, what gives the music its greatest attribute is the almost Germanic exactitude; a deeply mathematical sense of how the music unfolds and flows from one sequential notion to another; from one sketch to another in an altogether multi-cellular manner. It is in the integration of these musical cells that the unity of the music is achieved. The arrival of “S 64°14″ W 56°37″” is heralded by the music of a blizzard that was recorded at the height of winter in Antarctica, by the bassist, Werner Defeldecker. This elemental chill creates the musical environment for a proverbial warming of the sketch that follows. The howling of the wind creates an opening for not just percussion, but also tempered playing on cello and bass before the music meanders in and out of the chill of the composition, finally returning to the howl of the wind and the blizzard once again.

This is a powerful recording, which suggests that much can be achieved with a clever balance of composition and improvisation and then goes on to show how beautifully this aspect of music can be achieved.

Of all music, it was difficult to foresee that free improvisation, traditionally the music of abundance––indeed even of excess––could become the main setting for reductive strategies. After all, historical ensembles such as Gruppo di Improvvisazione Nuova Consonanza and AMM, both products of the sixties’ (counter) culture, had already demonstrated the aesthetic fruitfulness of reductive approaches to real-time music, decades earlier. But they remained secondary voices in the concerto of improvisational emancipation, drowned out by high-powered, vociferous free jazz. In the nineties, however, two things came together in improvised music: a rediscovery of those ignored voices; and an intense, renewed reception of contemporary composed music’s sound world—in particular, the reductive approaches of Morton Feldman and Giacinto Scelsi, but also the rich noise-world of Helmut Lachenmann’s scores.

Founded in 1993 in Vienna, Polwechsel was one of the first ‘improvisation in a new reductionist spirit’ ensembles, and was certainly one of the most closely-followed. Especially since, over the years, the quartet not only successfully managed to create a bracket for new improvised and composed music, but also to integrate newer forms of electronic music, particularly those which had been developed in the Vienna club scene by musicians such as Christian Fennesz or Christof Kurzmann (with whom the Polwechsel protagonists quickly entered into creative collaboration). It shouldn’t be forgotten that one of the participants in the first Polwechsel «pressing» was possibly the most radical reductionist of contemporary music: Radu Malfatti (his spot was later occupied by London saxophonist John Butcher).

Polwechsel is an ensemble that is usually characterized as an improv band—a classification that probably reflects the socio-musical background of most of its members, more than the music. Just about anyone would find the Polwechsel CDs’ composer credits perplexing: only two pieces on the CDs to date are identified as collective efforts, the remainder are attributed to individual Polwechsel musicians. And when one delves into the music itself, its austerity and precision makes its genesis in free improvised music seem unlikely—while at the same time, it is evident that the Pol-wechsel-Komponisten [trsl. ‘Pole-switching-composers’] integrate the idiosyncratic playing of their experienced improvising colleagues into their compositional methodology. This methodology simultaneously reveals a reductive aesthetic, and made Polwechsel one of the most influential inter-national ensembles of the end of the last century: that such inveterate improvisers knew how to circumvent the abundance of their vocabularies so sparingly and precisely, and how to insert their personal sounds in a disciplined way, without self-indulgence, into a group context, was truly a revelation for many listeners and fellow-musicians.

Despite this consideration, despite the fact that Polwechsel performs with stopwatches and scores quite conspicuously, the reporters at new music festivals where Polwechsel has given guest performances continually lapsed into the mechanism of viewing the quartet as bizarre debris from the improvisation world, and made corresponding (clueless) comments about the music. The presence of a saxophone or a “prepared table-top guitar” (à la Fred Frith) were apparently enough to signify, beyond a doubt, that this could not possibly be a “serious” new music ensemble.