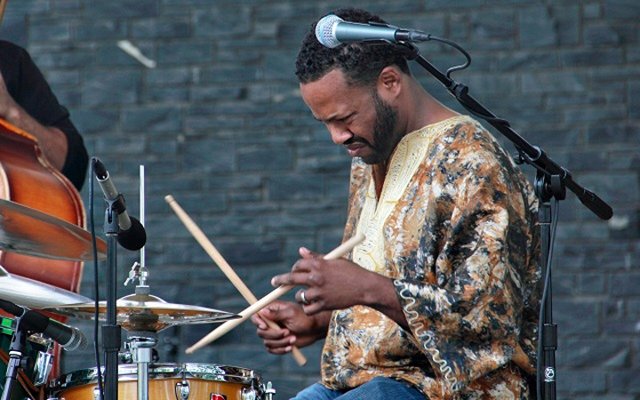 The drum is at the heart of Afrocentric cosmology. It has, for centuries, encoded and then decoded human life and communication as – in melody, harmony and rhythm it became the first instrument to accompany the voice as it spoke and sung; mourned and celebrated the continuum of human history. Through the ages and in the hands of experts it evolved at the turn of the 20th century] into the iconic drumset that, in the hands of experts penetrated the secrets of human expression that has led men to the Divine. This enduring continuum of experts forms a long list of nameless men and women beginning with one Baby Dodds who founded the lineage of great Jazz drummers and has continued through time and with ancestors like “Big” Sid Catlett, Sonny Greer, “Papa” Jo Jones, Max Roach, Buhaina, Elvin Jones and others like Roy Haynes… a list that includes several great ones in present day music. 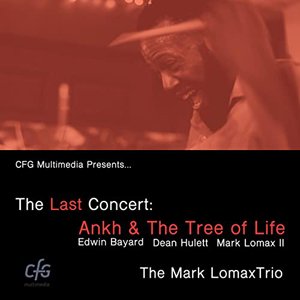 One of those “great ones in present day music” is Mark Lomax II, the Columbus-based musician, pedagogue, who has taken up the daunting task of celebrating the ongoing history African Diaspora. The art of music [like any art] is a lofty calling. Practiced with absolute honesty and with respect for history, the art of music becomes an essential instrument of keeping tradition alive. Mr Lomax has always done so in his work. But a significant aspect of his work is the understanding that while tradition is a wonderful reality, its inner dynamic is always to innovate. Mr Lomax has paid great attention to this in his music – especially to the music of his 400: An Afrikan Epic, a 12 album cycle that traces the history of the African slaves from the time they were brought to the continent of the so-called New World [against their will In 1619] there to suffer under the yoke of slavery under successive colonial regimes, and neo-colonial one in power today.

Meanwhile, Mr Lomax has, in each of the series of albums of his cycle, unpeeled the history of the Black man, layer upon layer, always echoing – with the sublime gravitas – the brutality and criminality of discrimination and repression. Like all poetic epics, Mr Lomax’s musical one has been crafted with great detail and through use of aspects of drumming – i.e., the melodicism, harmonic aspects – which he so expertly fuses into his polyrhythmic soundscape. Through it all, and as the composer and principal “narrator” of this epic, Mr Lomax has positioned himself [both in collaboration and] in creative conflict with age-old protocols about how his instrument “ought” to be played. And he has done so in the environment of his trio, which includes tenor saxophonist Edwin Bayard and contrabassist Dean Hulett. His challenge to Mr Bayard, for instance, was to share the role as “spokesman” for musical harmony as well as to be the alternate role of “narrator” of the epic. A similar challenge and role was envisioned and assigned to Mr Hulett, who performs this role with deep and rumbling gravitas.

Throughout the [successive albums of the] epic, Mr Lomax led from the front, actively throwing overboard melodic, structural and harmonic hooks that became expressively blunted through overuse. Then he built back the music from what might – or might not – be left of those protocols. 400: An Afrikan Epic was born of the instinctive radicalism of Mr Lomax and has culminated in his a recent recording, 400 Year Suite, which incidentally also included a special component written to acknowledge the importance of the Western music tradition and included an impressive section featuring piano and string quartet. However, mostly the epic centred on the trio and featured often volatile motor rhythms through which unfolded the drama of slavery and freedom.

The current pandemic through which continues to disrupt our world’s humanity prevented Mr Lomax from building on this remarkable work. But he has released – digitally, for now – a recording entitled The Last Concert. This last performance became the abrupt end of a series to support 400: An Afrikan Epic. With all but the Internet left for musicians to spread their artful stories, gone was the effect of the shared experience of music amid the heat and sweat of live audiences in an auditorium. Mr Lomax too was left in the cold and socially distanced world of digital media. However, this recording of that last performance in March 2020 – by virtue of the warmth of the superbly-engineered recording – came with a sprinkling of magic dust. It is, quite literally a snapshot of The Mark Lomax Trio performing Ankh and The Tree of Life which penetrates deep into the expression of African cosmology in order to find an accurate expression for its humanity through the music of the drum.

Listening to it we become conjoined with the Black experience. We become seized, as if by the very cellular mass of humanity, and are called upon to be part of the magnetic dust: by protons and neutrons and other particles. We are invited to become a part of the atoms and molecules that came together in the African Diaspora, engaged in an interminable dance. And so we become dancing partners attracting and repelling each other in time to the rhythm of that cosmic dance, ever so insidiously inserted into the skin of that cosmos. And we end up dancing to the beat of Mr Lomax’s drums, Mr Bayard’s saxophone and Mr Hulett’s contrabass. With two epic songs that begin and echo with the melodic beauty of Mr Lomax’s melodically-tuned drums on “The Ankh” we journey with the power trio through music that imitates the beauty and endurance of African life as it morphs into the tradition of Jazz. We become bewitched and are put under an irresistible spell by the incomparable artistry of Mark Lomax II.