Mateus Aleluia’s return to Africa, to reignite the fire of his African-ness – both spiritual and temporal – was an epic odyssey and has been exquisitely expressed in the album Ọlọrum. The repertoire of this beautifully-crafted album embodies the quintessence of what it is to be engaged in African [or Afro-Brasilian] contemplative spirituality. This exploration of what it is to be gazing at, looking at or being aware of the Divine is based wholly on the oldest cosmology of the world – that is, the African one. In African cosmology Ọlọrum is the Supreme Being who unites saint and sinner, male and female. In his hands and with the creation of this music, Mateus Aleluia pleads with Ọlọrum to unite slave and into oneness with the Divine. 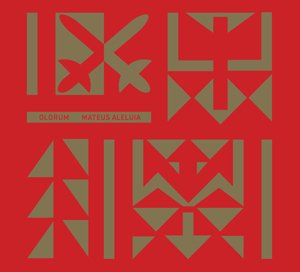 However, doing this through music presented a dilemma to Mateus as a Black Brasilian. As an artist – and Black [Brasilian] person – of [Christian] faith, he had two options: the first might have been to compose music that fused African worship into the [syncretized] form of traditional/contemporary Christian worship. The second challenge – the one Mateus Aleluia actually took to heart – was to syncretize the musical-cultural traditions of Brasil and the Western Church instead. This became, In essence, this entailed – extremely successfully, I might add – the reimagining of pure African forms and evolved Afro-Brasilian forms, such as afoxé, candomblé and others as being syncretized, so to speak into the Western Sacred Music tradition from the composers such as the polyphonic pioneer, Giovanni Da Palestrina and the giant of the Baroque Era, who was Johann Sebastian Bach.

The result is a wholly new and magical soundscape of Ọlọrum; a musical repertoire that elevates his [Mr Aleluia’s] very creativity itself to the realm of the Divine. Mr Aleluia is now in his 76th year and he has dedicated a massive, five decades of creative energy towards the study of Afro-Baroque Music and he has dived deep into research into ages-old African philosophies. These philosophies [thanks to the burial of everything African, by Western thinkers and colonialists] might easily be represented by a proverbial and scientific [cosmic] Black Hole and this is also thanks to the fact that so little study has been dedicated to the belief that Egyptology represents the origins of Black Civilisation [unless, of course, you are hip to Cheikh Anta Diop]. To this extent we might expect much from Mateus Aleluia’s music palimpsest, whenever that has been completely fleshed out. Until then, we have this exquisite music.

To say that it is ground-breaking would be to hardly begin to express how important this music is. It also sounds quite fascinating because there is, quite simply, nothing like it. But if you get hip to this music of Ọlọrum by Mr Aleluia, you’ll have taken a small and wondrous step in that direction; you’ll begin, that is, how he uses syncretism to reverse-engineer Afro-Brasilian and Western Polyphonic and Baroque Music. It’s a terrible word to describe the creative process as is the word “osmosis”. Both words simply do not have the power to represent what his music inhabits – a powerful and molten mix of polyphony, counterpoint and African polyrhythms so hot as to effect the rise of its creative vapours to the vaunted realm of the Divine.

The music of Ọlọrum is woven into the immense and thunderous African cosmology that is announced and driven by the incessant polyrhythms of the drums. Mr Aleluia inserts [enters] into this universe, his magnificent rumble of his baritone accompanied by the classical guitar and the Brasilian atabaque. He dives tight into the music by invoking the name of Ọlọrum, imploring him to redeem his soul – and the souls of generations through this powerful lyric: “My family was lost in slavery / In every human I meet I see a brother / And on my knees I cry out, Ọlọrum / Leave your kingdom and come visit me / Your people are tired of suffering.” The powerful Lutheran recitatives upon which Bach based his vaunted chorales and other religious music comes to life in the form of supplications of this extraordinary Black Man raising his voice to Ọlọrum, who is now none other than the God The Father of the of Luther and the “Komm, Jesu, komm, Mein Leib ist müde…” and “Weicht, ihr Trauergeister/Denn mein Freudenmeister/Jesus, tritt herein/Denen, die Gott lieben…” of Bach’s famous motets.

This is metaphysical work, albeit not with the [real or implied] pejoratives that the iconic 18th century English critic Samuel Johnson used to describe the Metaphysical Poets, John Dryden and John Donne. Mr Aleluia’s metaphysical words [and music] “sing” with the lyricism of sacred texts and dances to the polyrhythms that are much more ancient and from a place of immense gravitas and wisdom that echo what we know of Greek poetry. To catch up to Mr Aleluia, however, we must do something supernatural as listeners; we must reach “black to the ancient future” of Africa and inhabit the cultural topography with Mr Aleluia as our guide. There we will meet and be uplifted [in other words] “saved” by Ọlọrum.

The music of Ọlọrum is crafted into an enormous production, with many superb musicians who are completely attuned to Mr Aleluia’s vision and artistry. It is performed with astonishing technical expertise and an enormous amount of flair – it’s rare to hear traditional Brasilian instruments sounding both grave and light, shaping the music’s often abrupt transitions from boldness to lyricism with delicacy and style. Throughout the music Mr Aleluia pours out his heat [and soul] into his music of deeply religious intensity. His powerful, percussive writing is cast into a modal harmonic backdrop and provides the music with a raw and primitive edge. Ọlọrum is a highly personal creation of great solemnity, like resembling, in intensity and sentiment – if not in statement – much of what Bach did. As overwhelming sense of mystery pervades the music, but at every turn Mateus Aleluia draws us in with his suggestions of deeply felt awe and the power being in the presence of [God Almighty]… in the presence of Ọlọrum.