Home Music Sinne Eeg: Dreams
Élan, intelligence, elegance and passionate engagement: Danish singer Sinne Eeg brings it all to her exemplary disc Dreams, her eleventh album. An even mix of standards and wickedly angular melodies composed (mostly) by Miss Eeg the album is yet another masterpiece from a singer who can do no wrong with her voice and the manner in which it breathes into song. With impossible leaps, Miss Eeg appears to have a visceral connection to each song that she sings, which results in a vocals that are uncannily intimate, and with perfect poise and balance as her voice floats and weaves lyrics into music with sublime clarity and precision. A rarity even among the most experienced vocalists.

Miss Eeg is in such command of this repertoire that she chooses to begin the album with a slow, chart, beckoning you to focus on the ear-catching details of the lyric as the unfold in seemingly interminably and seductively in the space between her voice and your ear. She continues to employ this kind husky persuasion through the repertoire alternating between vigorously swinging charts and music that is more balletic, stately and yet swung, but at reverential tempos. The vibrant pulse is created for her to sing and dance around by 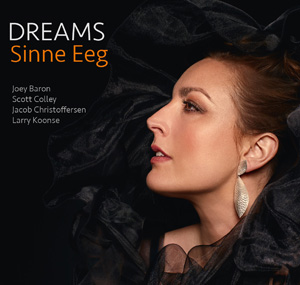 The standards that Miss Eeg has chosen for this album are sung with grace and extraordinary beauty. “Falling in Love with Love” and each of the others show Miss Eeg’s impeccable pedigree raising her versions of these songs heavenly-high above the sea of vocal music built on standard repertoire. Her own songs seem to have been sparked by moments of great creativity and “The Bitter End” is – both literally and figuratively – only the beginning. The crowning moments come with “Dreams” and its sumptuous wordless vocalastics, followed by the agony and pathos of “Aleppo” a powerful dirge for the dead in Syria. As if that were not enough both those songs are followed by one that raises the album into a rarefied realm as, with delicate timbre on “Time To Go”, Miss Eeg’s voice soars to the Divine.

Jacob Christofferson is a long-time musical associate of Miss Eeg and it shows. Their relationship is one akin to that of the great lieder singers and pianists. Mr. Christofferson plays an equal participant in the musical process staying in the shadows when he has to and sliding into the limelight when his time draws near. Every so often this role is also assigned to Mr. Koonse and his guitar. But while they play with quiet majesty the bassist and drummer are far from shadowy figures on this beautifully-engineered album from a one of the most alluring figures in music.