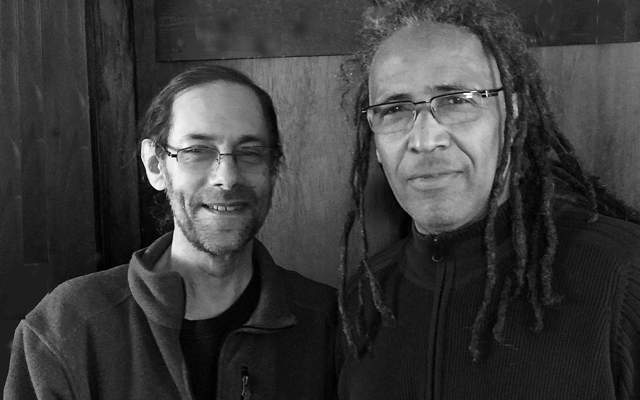 No matter where his musical expeditions have taken him the songful explorations of the piano has remained an abiding love for Bob Gluck. He has also thrived in the intimate environs of duets, sometimes venturing out into quartets. But in every adventure has tested his inextinguishable creativity to its furthest limits – no matter in what format he has played music. Still his recording At This Time – Duets with the woefully undervalued drummer Tani Tabbal stretches his art of song like no other sojourn that Mr. Gluck has ever undertaken.

With four original compositions and five visionary impressions of other composers’ work all dedicated to the legendary bassist Charlie Haden, Bob Gluck and Tani Tabbal have fashioned a particularly memorable tribute to a bassist who played his and others’ music in a manner that was at once simple and lyrical, abstract and profound.

And as Mr. Haden was above all a human being of great substance, who recognised human freedom as one of the most important and urgent needs of our time, Bob Gluck and Tani Tabbal have fashioned the pinnacle of this record 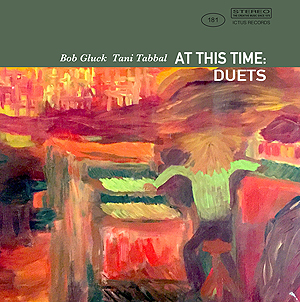 which is the passionate, bluesy version of the Chilean anthem “El pueblo unido jamas sera vencido (The People United Will Never Be Defeated)” – of which there are two versions – into the centrepiece of a truly scintillating tribute to Mr. Haden.

Bob Gluck’s instinct for lyricism and spontaneity is an apt leaping point and a perfect foil for Tani Tabbal’s whose free-range flights, rumbling pulse and angular melodicism give music such as “Lest it Fade Away” an unshakeable core. Despite its darkish antecedents the song, in which electronics suggest glinting lights and sinister drums visualise mysterious depths, making the song’s sudden dénouement.

That follows a similar musical utterance and a somewhat fitting bookend for Wayne Shorter’s mystical composition, “Sanctuary”. And with a beautifully abstruse (second) version of “I Fall in Love too Easily”, full of pathos for its characters the duo return to the outlying regions of song with “Persistence”, where electronics and cymbals are the primary sources to tackle the music’s volcanic abstractions. The album closes with a relatively quiet version of “El pueblo unido”, which for its sheer colour and variety of percussive timbre imparts a triumphant stature to the iconic piece.

For all its buoyant, aristocratic grace and psychological ambiguity, and almost insolent virtuosity on the part of both musicians, this record will remain one that has captured the high ground of musical duets for a very long time to come.