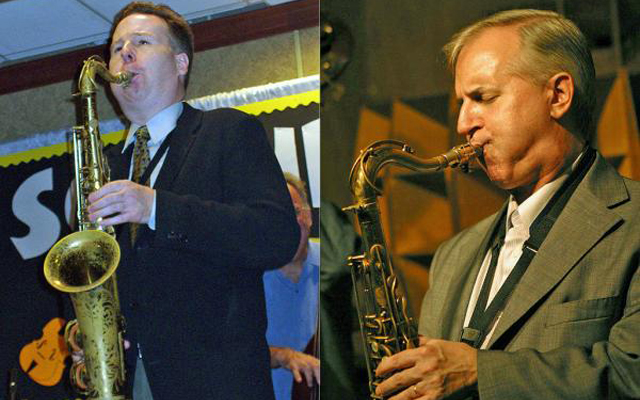 Who said there would be no life after one of the greatest cutting contests between two tenor saxophonists: Ben Webster and Coleman Hawkins? ‘Things,’ as the Ellington band once said, ‘ain’t what they used to be’? Perish the thought. Here come Scott Hamilton and Harry Allen swinging again. These two tenors are very much part of saxophone royalty and while they may have not reached the stature Webster and Hawk this record certainly helps accelerate the process for someday soon, if things continue along this path, both the younger saxophonists – already on the footstool of the gods – will one day occupy a regal chair right next to them. 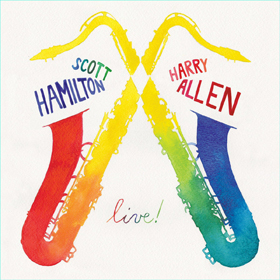 I am aware that by comparing Scott Hamilton and Harry Allen: Live to the path breaking work of Lester Young, Hawk, Bean, Rollins and ‘Trane that I am shaky ground, largely because Scott Hamilton and Harry Allen may still be paying their proverbial dues. And when you experience live in the raw your music is a cry that is informed by the blues. However, who’s to say that Harry Allen, for instance, does not dig deep into the blues, or that Hamilton does not do so either? Also there comes a time when credit must be given where credit is due. This performance by Scott Hamilton and Harry Allen comes from that deep kind of place. The dazzling disc offers the best of two worlds: airy nimbleness matched to a richness of sound which sometimes seems impossible to come from few other tenor saxophonists playing today.

That’s partly due to the dynamic range of both men, and their balance between emotion and cerebral ideation achieved at the Kuumbwa Jazz Center, Santa Cruz, CA, by executive producer Daniel U. Smith and engineer Patrick Brede. Passion and precision are one. The apogee is the ‘Lester Young piece ‘Tickle Toe’; perhaps even the achingly beautiful ‘Body and Soul’. Melodic lines are beautifully moulded, the return of the opening chords hushed, the climaxes gorgeous and the dying fall subtly atmospheric. ‘Body and Soul’ lilts with delicate ritenutos, the finale of ‘Tickle Toe’ bounces.

So does the opening choruses of Gene Ammons/Sonny Stitt’s ‘Blues Up and Down’. This is contrastingly stout and streaky. Still Chords this time round sound robust, notes at the end of dying lines are filled with ghostly vibrato and the music is thus filled with contrasts in the alternating solos by Scott Hamilton and Harry Allen. The ricochets of their extraordinary manoeuvring through this and the other repertoire on the disc is surprisingly like Ben Webster Encounters Coleman Hawkins: tenor brogue meets sass, fizz meets energy.

Track List: Apple Honey; The Lonesome Road; Tickle Toe; A Sound Investment; Body and Soul; Blues Up and Down.