Home Music Rudresh Mahanthappa’s Indo-Pak Coalition: Agrima
Rudresh Mahanthappa’s Indo-Pak Coalition is making connections throughout Agrima. This excellent album is like an elegant railway system linking Jazz, folk, Hindustani, Pakistani Qawwali, Middle Eastern music and the chamber music style of the post-serialist and the avant-garde, 21st century conservatoire. If this sounds like quite a mouthful listeners will be delighted that despite the matrix of sound, the music is quite the distillation of it all in the singular voice of this Indo-Pak Coalition. Still, to describe it as such gives the impression of overcooking when in fact the whole project is a masterpiece of subtlety.

Rudresh Mahanthappa’s take on the lineage of the spacy alto saxophone, made cooler with the electronics – by himself and Rez Abbasi – in this music is less than conventional, seeing him summon all of the history of the woodwind’s instrumental tone-textures which float benignly – and sometimes in tongues of tire as well – over the twangy sound of Rex Abbasi’s strings that seem to roll around in melodic progression that feeds Mr Mahanthappa’s 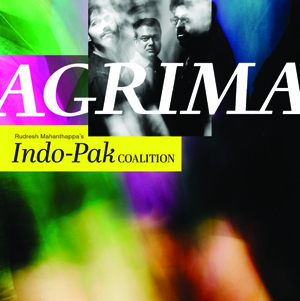 long jabbering lines that in its turn adds a rich and not entirely predictable harmonic foundation to the music. All the while both melody and harmony are nailed together by the tattoo of Dan Weiss’ drums or – as in the case of “Alap” on Side A of Disc One, the inspired,rumbling pulse of his tabla.

The surprises, when they come, are effective if discreet: a raga-like riff is played as ostinato melodic invention by either alto saxophone or guitar, alternating with a gamelan-like riff, played as stabbing pizzicato harmonics, a delicate curlicue of a bass line by Mr Abbasi on “Rasikapriya” on Side A of Disc Two underpins what sounds like a keening Gaelic lament and a close-knit passage develops from a single phrase on “Revati” (on Disc Two Side B). The recorded sound balances detail and warmth. All in all, Agrima is definitely worth its weight in gold.