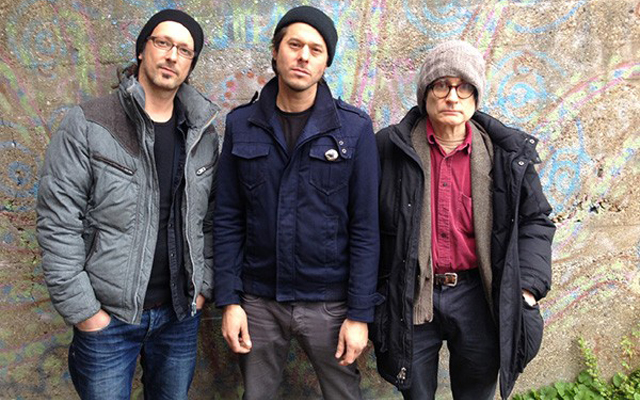 Despite its rather whimsical title: …don’t buy him a parrot the music here is less capricious than serious. Its four short pieces are written not only with the pencil but also with the nerve endings of the musicians Christoph Erb, Jim Baker and Frank Rosaly who are credited with their ‘writing’ and performance. And while the shadow of the electronic engineer, Richard Stallman, of the liner notes might hover over the initial narrative of the music it is more as a source of quotation than a model of dense argument that gives the music forward its forward momentum.

The opening chart analogous with the story of Mr Stallman’s alleged contractual stipulations opens with a flourish that consists of a yammering saxophone into which the piano collides, soon coalesces into an expansive melodic line into which the drummer 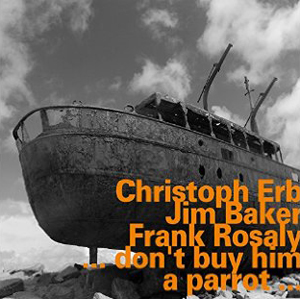 Frank Rosaly is inducted, by Christoph Erb and Jim Baker, before a mood of restless anxiety establishes itself. The pattern of contrasts continues, leading in the longish final bars, to passages where time seems suspended, then rushed and the players use their lines to float free of each other.

Continuing to sing with its feathered metaphors the music of the second and third piece continues to avoid dramatic contrasts. The saxophone of Christophe Erb is propelled by its agitated, relentless and impatient kinetic energy, while Jim Baker’s piano is pummeled rather than caressed, its arpeggios and runs have a savage intensity and together with the rattle of the snare drums and tom-toms, punctuated by periodic explosions on the bass drum and the fiery sizzle of Frank Rosaly’s cymbals, the music is imbued with the feel of a rancorous argument in which the participants eventually reach a plateau of exhausted agreement presided over by the rumbling gravitas of Mr Erb’s bass clarinet.

Magically – especially in the final work on this recording – silence plays such a significant part in the proceedings that it may be considered a fourth instrument. This is largely a result of the relative silencing of the drums and the rising to eminence of the bass clarinet, played mournfully as Mr Baker’s fingers leap across the upper register of the piano, but not for long… Theatrical agitation returns shortly together with a series of dramatic gestures of the music itself, with its ostinatos and harmonics swirling around the three instruments with dizzying intensity. The music may stretch these musicians to t heir limit but their individual virtuosity enables them to calmly absorb its intricacies into their repertoire.

Track list – 1: …don’t buy him a parrot…; 2: (parrot, figuring…); 3: for canaries, career opportunities in the mining industry; 4: “it isn’t hard to follow a man who carries a bird cage with him wherever he goes”