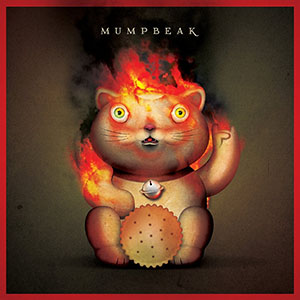 The album Mumpbeak of the eponymous electric band, fronted by British keyboardist Roy Powell, is brimful with primordial cries and visceral energy so razor-sharp that every corner of silence is ripped to shreds; sliced by the stark raving clavinet played by bandmaster Roy Powell, while the bassists mighty, bruising growls sometimes in unison and at other times solitary; rumbling in the depths and occasionally offering contrapuntal suggestions as if to rescue the drums that swish and rattle and hum with the same primeval vigour which keeps the only percussive end of the music from falling apart. Here Pat Mastelotto keeps guard, divining the pulse of the play keeping it from going delightfully insane, but sometimes it is he that knocks Mr. Powell’s Hohner off the rails, forcing the keyboard player to resort to peals and wails with his electronic pedals atop the clavinet, keeping mind and body and the rest of the musicians from spinning completely out of control. Not that it would have mattered in the grander scheme of things.

One word titles, which ostensibly are nomenclature for aspects of an imaginary beast; the very words an imaginarium in themselves, but which might also describe aspects of its bestial architecture. The music contained within roars with unbridled vigour from the time the walls of sound are unleashed. Mr. Powell leads his posse of musicians mostly led by Mr. Laswell, whose bass provides the leading edge of the harmonies. The bassist is mostly egged on by another bassist—mostly Shanir Ezra Blumenkranz—none of whose playing can usually be discerned, except with the cognoscenti to whom Bill Laswell`s sound is usually that characteristic growl that occupies the deepest realm of the bass. Lorenzo Feliciati joins Mr. Laswell on “Nork” and while Mr. Laswell and Mr. Feliciati become a threesome with the addition of Tony Levin on “Oak”. The vivid colours are molten and echo mid-70s Bill Laswell and the unexpurgated legends of Weather Report. However, Roy Powell’s is a singular voice and his compositions provide intimations of his character in their minimalist phraseology. Of course, Mr. Powell drives his phrases from the front like sparks that precede the inevitable flames that are fanned by hands flailing across the keyboard.

While the music seems to come out a delightfully grotesque sense of humour, at some point—especially in charts such as “Forelock” and “Piehole” that Mr. Powell might have felt a glancing blow from that brilliant, but somewhat forgotten genius: Mervyn Peake, who gave the world that monumental Gormenghast Trilogy. And then there is the near certainty that both Mr. Powell and Mr. Laswell might have some secret longing to bring some of the legendary figures from Jorge Luis Borges’ 1967 masterpiece, El Libro de los seres imaginarios (The Book of Imaginary Beings). “Nork” and “Piehole” are distinct possibilities here; from the realm of Mr. Borges, but also with echoes of the epic fantasy of castle Gormenghast. Of course, all of Mr. Powell’s creations on Mumpbeak are all his own; the creation of a soul as open and infinite as it was meant to be—in the grand scheme of things as impossibly imaginable as anything that has been created this year at least.