Romain Collin’s musical excursions have already made bold declarations of his pianistic and artistic prowess. Now he confirms his appetite for the big entrance with this new album Press Enter an album rooted in jazz, yet uniting various idioms inevitably from Europe where he first felt the impulse to adorn. Here he brings together idioms and metaphors united by the harnessing of maximum variety and maximum discipline. 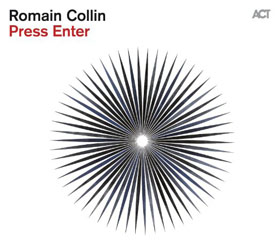 Collin with be stuck for some years to come with the epithets ‘young’ and French-born, Berklee educated and so on. But the instant he touched the piano such information becomes irrelevant. Certainly he can muster all the athleticism, velocity and finesse of a competition-winner ready to burst upon the international scene. But like the rarest of that breed his playing already has a far-seeing quality that raises him to the status of the thinking virtuoso. There is, if you care to rationalise, a European depth of sound and eloquence of phrasing, tempered by the American intellectual grasp. There is also a sense of exalting in technical prowess and energy. But not once in the course of this performance did I feel that such qualities were being self-consciously underlined.

Which brings me back to this CD and Collin’s performance on it… As a virtuoso Collin has raised the bar a few notches higher for other pianists of his generation and by virtue of that fact alone, the whole experience of this recording his music is all the more compelling for it. But Collin has gone a stage further, with an even wider range of colour and attack, plus an almost tangible sense of mission, which together help to paper over the cracks (if any) in the musical invention and make, for me, for one, attend to the music – especially his (Collin’s) compositions observing their righteous fury and flights of fancy with new respect. His mind and his fingers are so much in sync with one another that it is as if he has neurological fingers – much greater than those that lurk just under the skin.

Romain Collin’s music ranges itself more naturally alongside a patrician intelligence such as his fellow wayfarer (and cohort on this album) Jean-Michel Pilc along with the sui generis extremes of a Glenn Gould. At times Collin’s imagination in slower, more balletic songs such as Event Horizon and arguably betokens a fraction more wisdom than most pianists his age. Such fine nuances only emerge in the dutiful process of comparison, rather than in the wholly absorbing experience of Collin traversing another musical peak. If a finer piano recording comes my way from 2015 or this year so far I shall be delighted, but frankly also astonished.

Track List: 99; Clockwork; Raw Scorched and Untethered; Holocene; The Kids; Webs; San Luis Obispo; Event Horizon; The Line (Dividing Good And Evil Cuts Through The Heart Of Every Human Being); ‘Round About Midnight.

Described by NPR host Jon Weber as “a visionary composer, an extraordinary jazz pianist and a very bright young rising star in the jazz world”, and touted by the Boston Globe as being “among the leading lights of a new breed of jazz players”, Romain Collin continues to develop “a highly personal and contemporary vision” (A Blog Supreme, NPR), combining the tradition of improvisation with sound designing, and classical music. Read more…