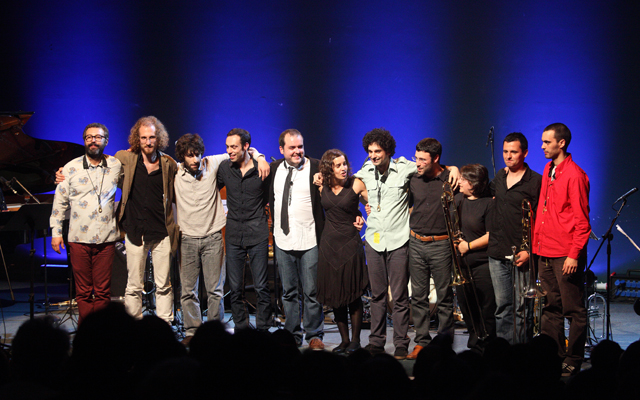 This is a ravishingly beautiful Big Band album. The engineered sound offers a realistic perspective from a seat (as it were, of this majestic live set) at the back of the stalls at the 2015 Festival in Portugal. Turning up the volume will likely make your floor shake before the bass and winds snap into focus, and the percussion in the finale of Sem Chão has been placed at a discreet distance. 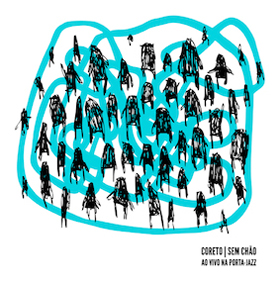 The Band – including such luminaries as baritone saxophonist Rui Teixeira and the trumpeter Susana Santos Silva – nevertheless sounds on their mettle, considerably less more refined in the brass and winds and attentive in response to the soloists and the collective music directorship that is the shared experience here. The arrangements are outrageously skillful and played with the kind of expertise and flair that befits the virtuosity that each of the players brings to the table. The music is constantly challenging not only to the players but to the audience (listeners) as well. Hollymood, for instance, booms and rattles away but I like especially Sem Nome and how somewhere at the 2 minute mark the Band holds one note while the drums thunders on.

I like also the fabulous plunger mute of the trumpet solo on Don’t Forget Ayn Rand on Music. It’s unfortunate that this solo goes uncredited on the recording. It is fabulous. I have never like the reactionary prose of Rand, but the song deconstructs her views, if you like, quite beautifully. Musicians also sharpen the knife while playing Maggie and the roar of the Band here is not something you are likely to forget in a hurry. The nine charts contain some first-grade Big Band stuff, not the least The Great Quest, which is memorable for the expanse of the tonal palette and the drama of the music’s narrative. Solos are perfectly placed and the experimental goal of the music is achieved. The beautiful machinery of the Band in motion is also a delight for the ears. And because of this Sem Chão shoots to the top of my list of albums in a long, long time.

Listening to the performance I was reminded of the performances of Ellington when he performed his suites. Equally we have reason to celebrate as Coreto run the music down. We feel every deep cut into the heart and the mind, every pang in the side as the music sneaks up on you, hammering you in the side of the head with a wall of sound. But never for once do you feel that a single note is out of place, nor is there a moment when the music ever sounds contrived as not a single not is out of place. Most significantly, it’s an exquisite performance in which the music’s erudite charm, so simple in character and yet so difficult to capture, takes centre stage.