Home Music Rob Mazurek: Up from the Underground

The Ascension Suite and Holy Ghost, dedicated to the cornetist’s mother, is a monumental tour de force with only a defined beginning, but no defined end and an all but continuous, epic musical journey that flows right out of the shrill bending sound of its first electronic notes. The various sections of the suite—each reinforcing the composer’s belief in the interconnectedness of being – in the ebb and flow of tides, a metaphor for the beginning and end of all life as expressed in all aspects of sound—with everything being woven in an endless warp of time. And so, with rare, almost singular ingenuity Rob Mazurek guides this score from out of its seemingly primitive, monophonic beginnings to an epic charge that takes place in a zone that can only be experienced with complete body and soul, preferably with eyes closed and fingers gently pressed together as in a Yogic mode. The reason: in what seems like a time-space continuum almost embodying the energy of e=mc2, the poetry of the participating musicians turns the guts of the work inside-out. 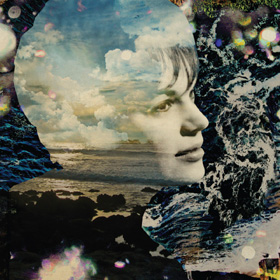 The absolute summit of the work is, of course, Return the Tides where Mr. Mazurek’s’ poetic libretto slips into what seems like a phantasmagorical, biochemical scat that brings a breathtaking polyrhythmic touch to the vocal gymnastics of voices, who earlier, in the proceedings causes the whole body to quiver delightfully with the stutteringly executed syllabic breakdown of glittering accents and magical slurs in her dramatic narration. And so, as Rob Mazurek peels away layer upon layer of music from a primeval electronic whine and the brazen earthiness of the other instruments our own ever-present journey with the ensemble right up to the dramatic and soaring arpeggios of Guilherme Granado’s keyboards that closes this performance on the arc of a curve of Euclidian proportions as the music fades, but only just… For it seems that this may be a mere beginning of our own invited journey into the exciting, never-ending musical world of Rob Mazurek.

Working within a multitude of stylistic contexts, electro-acoustic composer/cornetist Rob Mazurek has helped redefine the aesthetic boundaries of artistic expression for well over two decades. Born in 1965 in Jersey City, NJ, Mazurek rose to prominence in the fertile mid-1990s Chicago jazz scene, quickly venturing beyond the traditional tenets of the idiom to become one of the most compelling improvising composers of his generation. Read more…