Upon reflection I think that this is one of the greatest discs of contemporary improvised music – John Russell’s music – that I have ever heard. It contains four of his finest and most beguiling works in that ‘vers libre’ (if you like) each (song) of which is representative of that metaphorical language relocated to the landscape of music. Every one – and I mean every single one – that John Russell plays offers either a new benchmark in his repertoire or a version of improvised music. To wit: The First Half of the First Half compares favourably with some of Anthony Braxton’s live performances in the majestic unfolding of its schematics, the notoriously fast and furious right hand of Mr. Russell flying across the strings as Mr. Braxton’s flies of the keys of his alto saxophone as one listens to spinning chorus after spinning chorus of horn-like, thrilling lines. 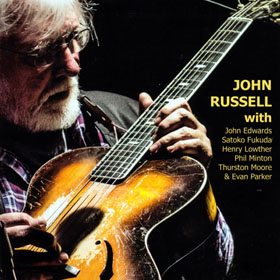 The rest of the repertoire, especially The Second Half of the Second Half with Thurston Moore also on guitar appears to be the most technically challenging of all the musical paraphrases for guitar and is a miracle of contemporary poetry, heady bravura and clear structural command. It can frequently seem like being punched repeatedly in the gut with its succession of short stabbing figures, martellato, double and triple forte passages and with the guitarists putting the brakes on whenever a particularly nasty bend comes into view. Mr. Russell uses these sections simply as the asides and punctuation that – say a – Liszt or Paganini would have intended their piano music to be used. Oh – and it is quite grippingly exciting. This John Russell ends the disc with his masterly work, having segued into it with The Second Half of the First Half and The First Half of the Second Half – both equally fascinating interpolations of each of the first and the fourth pieces.

If you want to introduce someone to John Russell the improviser – and perhaps draw attention to the amount of work involved in simply creating the groundwork for these pieces, let alone creating them, maybe adding that only a genius could achieve such a feat – this is the disc to play to them. In addition, the burnished glory of his battered guitar, beautifully recorded by Matt Saunders, is a lively, powerful and velvet toned instrument from which John Russell draws the most sumptuous sounds. EMANEM’s overall packaging matches the quality of the playing. This is an exceptional release.

Working within a multitude of stylistic contexts, electro-acoustic composer/cornetist Rob Mazurek has helped redefine the aesthetic boundaries of artistic expression for well over two decades. Born in 1965 in Jersey City, NJ, Mazurek rose to prominence in the fertile mid-1990s Chicago jazz scene, quickly venturing beyond the traditional tenets of the idiom to become one of the most compelling improvising composers of his generation. Read more…