Home Music Rob Mazurek: Up from the Underground

Almost all the discs of Rob Mazurek in recent memory will draw you into a journey most magical and unforgettable whether with his duo recordings, or with the Sao Paulo Underground, as well as in larger ensemble settings. In these two discs under review, the multi-dimensional artist appears in the latter – group called the Exploding Star Orchestra, featuring such luminaries as flutist Nicole Mitchell – as well as in with a smaller group called Black Cube SP. Voices- spoken and sung in sinewy tenors and profoundly grumbling basses collide with mercurial brass, reeds, woodwinds in counterpoint with stammering and stuttering percussion. Through the sorjourn the language of music evolves in proverbial leaps and bounds; today incorporating even the dramatic manipulation of electronics to broaden the spectrum of sound. As with the language of music, so also with its literature, which is why to these artistic gems of polyphony become what must surely be regarded as must surely be the magnum opus of one of today’s most gifted voyagers in the realm of sound.

Rob Mazurek has always seemed to give notice of his ingenuity and singularity as a composer. To musicians associating with him and participating in his works, Mr. Mazurek has constantly challenged them to peel away established concepts and beliefs about music is produced and consequently to be heard and seen. Consequently his music presents a dramatic and exciting challenge to listeners as well, as Mr. Mazurek, like the modern day Pied Piper in the imaginary world of Hamelin, seduces his listeners, beckoning them to an exciting, unfamiliar place where they can give themselves over to the music unconditionally as they listen with visceral physicality and experience the sculpturesque, spectral nature of sound. This sound seems to exist in four dimensions. This, in turn, certainly suggests the magical dynamics that Rob Mazurek is able to create so forcefully as to present something that must be heard not just with the ears, but in some weird tactile sense, with the entire body and of course the soul as well. Here Mazurek becomes one of only a handful of composers and performers who are able to conjure this kind of cuboid experience—something that appears similar to the music of the great 20th century jazz musician Sun Ra and the Frenchman, Gerard Grisey.

Galactic Parables appears to come from the deeply felt spirituality of a restless soul, not necessarily the composer, but perhaps that of a character in this astral narrative. The extended work destined to flow from the mind and the body, through the cornet of Rob Mazurek is astounding. An experience as if from a rarefied realm. It seems to have emerged almost as painfully and joyfully as a child does from a womb and the drama of the composition’s birth is so real that not only can the ears experience its primal cry, but fingers it would seem can touch the skin of the sound and delight at its ethereal pulsating and palpitating softness. 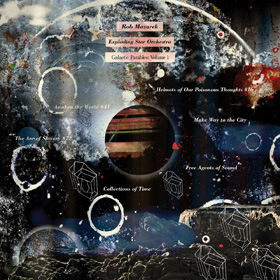 To get to the textural aspect of what the music each individual constituent the album feels like a is a composition created by weaving, as if by magic, the various timbres created by the participating instruments played into a musical quilt of ever-changing texture and design. And whilst all this is taking place in the three visible, very tactile dimensions, the voices in its sung, annunciated and various vocalastic incarnations including the recitations of verse by the composers seems to emerge from the fourth, albeit seemingly timeless dimension, in the quintessential element. That the dimension of time should be stopped, then extended interminably by words and music is the coup de grace of the work. Ostensibly—and once you have got past the two discs of this package the music flows with a quality that is consistently superb and imaginative. You hear this throughout what is by any reckoning a gloriously purposeful, visceral, chamber work, something that sets the two discs apart from much contemporary music today.