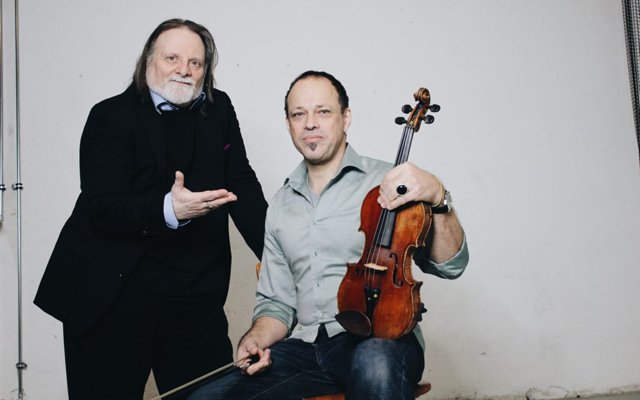 Not only does Crossing Borders bring together two musicians twenty years apart; yet who seem to have grown into each other’s musical topography to such an extent that there is no daylight – much less chronological time – between them; but the recording also brings together remarkable and significant repertoire created by the two musicians in question: Richie Beirach and Gregor Huebner. Setting the grounds for an enormously successful performance on disc is the WDR Big Band, an orchestra so sharp that it cuts through the diabolical technical complexities of this music with magical dexterity and ease. It’s hardly surprising of course; the WDR Big Band has an enviable history of attracting great music because its musicians are not only magnificent but also great readers and idiomatic interpreters of the music that comes their way. 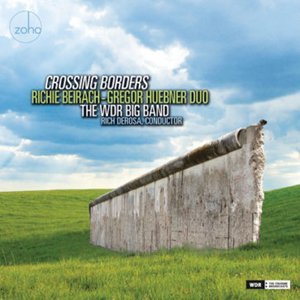 The winds section comprising veterans of many a campaign such as Johan Hörlen, Karolina Strassmayer, Olivier Peters and Paul Heller and a brass section that also includes superb virtuosos such as Andy Haderer, John Marshall, Ludwig Nuss together with young Turks such as Shannon Barnett and Mattis Cederberg… all of these musicians belong to long line of musicians who have upheld the enviable history of the orchestra. And they prove their mettle once again on Crossing Borders by storming through this material as if it were a walk in the park. Not without significant assistance from the disc’s standard-bearers: Mr Beirach and Mr Huebner. The sound canvas is framed from end to end by piano and violin and the two instruments feed off and fortify the great wealth of winds, brass, bass and percussion that comes with the WDR Big Band. Each piece is so completely required to put this music together in the grand manner that ultimately unfolds.

The disc features shorter works written by the magnificent pianist Mr Beirach. One of the most fascinating composers from either side of the Atlantic, Mr Beirach’s work has attracted and forged enduring musical relationships. Not the least has been two notable ones. One illustrious relationship is with the saxophone and flute master, Dave Liebman. The other is the one featured on this recording with Mr Huebner, a musical friend of over two decades. Mr Beirach’s pieces are shortish miniatures. But they are potent ones from the opening powerful chords of “Rectilinear/Paradox”, a work that reveals its composer’s delight in the following mysterious concepts with a view to unlocking – and rendering – the secrets of things geometric and philosophical in a manner that is beautifully musical.

Mr Huebner contributes the two longer works to this album. In a sense we find ourselves Crossing Borders because of them. The first work – the “Violin Concerto No.3” – is a look back at a seismic event that devastated the small Himalayan state of Nepal not too long ago. Mr Huebner’s music captures the physical shock and emotional effect of the utter ruin that befell hundreds, if not thousands, of simple folk who looked to the rest of the world to uplift them from their loss. Traversing the planet with an empathy that is rare and produced works of great artistry, Mr Huebner follows up his significant forays into the Latin American and Afro-Caribbean world by crossing into the seemingly sacred realm of the Himalayan country. The composer’s humanity is revealed in music that is deeply felt in the poignant slow movements as well as in the onrush of ecstasy with which the piece concludes, seemingly to mirror the manner in which a people have been uplifted despite tragedy.

Mr Huebner’s other long work celebrates his relationship with Mr Beirach. His bouquet of music to his friend is the “Piano Concerto No.3” and, happily, Mr Beirach himself does the honours by playing on it wresting the music from the formidable WDR Big Band and setting forth on remarkable solo voyages glittering with dazzling right hand runs and vaunted arpeggios, while his left hand cracks open the harmonic vault releasing chords of searing intensity and technical prowess. The disc comes to a close with two more of Mr Beirach’s compositions; the elegiac work “Elm” was written to commemorate the life of violinist Zbigniew Seifert and the final one – “Pendulum” – returns us to Mr Beirach’s world of mystery. On the former The ink-dark and melancholic melodic line unfolds beautifully in the hands of both Mr Huebner and Mr Beirach with the Bog Band providing a magisterial harmonic and rhythmic canvas as a backdrop. The energy is generated from a tumbling, percussive groove by the Big Band, conduced here as elsewhere by the masterful Rich DeRosa, and the music pours forth as if from a purring motor that drives both Mr Huebner and Mr Beirach on the final piece to provide a perfect and kinetic end to a memorable disc