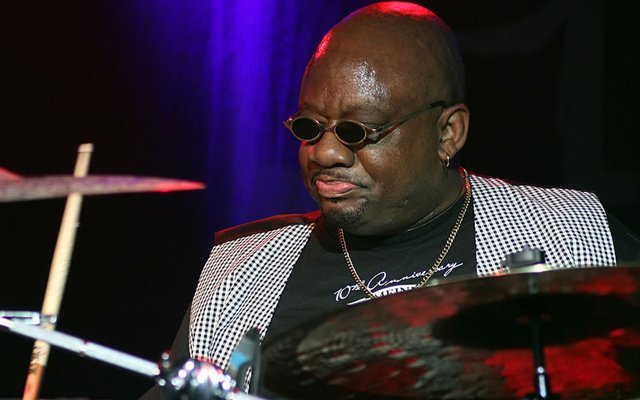 The Jazz drummer Ralph Peterson has dedicated his life not only to music, but also to the music of Art Blakey and The Jazz Messengers – or “the music of ‘Bu”, as he might as well call it. Mr Peterson is a life-long devotee of Art Blakey (Ibn Buhaina); an everlasting neophyte and student of Mr Blakey’s iconic percussion colours which invariably invoked summoned the African Gods onto the Jazz stage whenever the ancestral zealot played his music seemingly from an evangelistic pulpit rather than the stool of a drum. In tone and manner, Mr Peterson seems to summon the same spirits when he plays; which means – in today’s parlance – that he stays “in the zone” at all times; playing as if he is “in the pocket” while you can take a slow boat to China with your solo and when you return, he’ll still be there, where you left him; rock steady… delivering on swing and on rolling thunder. 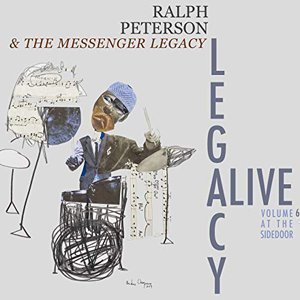 As you may have guessed, there are few drummers today like Ralph Peterson; musicians who put considerable weight on a rhythm that propels melody with so much power that it – and the rest of the music as well – is launched into the rarefied realm. So you could forgive him, once again, if he is still proclaiming the gospel according to Art Blakey and the Jazz Messengers. That band was – for several generations of musicians – the training ground and launching pad for the careers of so many musicians from Kenny Dorham and Sahib Shihab, through Hank Mobley, Jackie McLean, Benny Golson, Bobby Timmons, Wayne Shorter, Curtis Fuller, Lee Morgan, Bobby Watson, Victor Sproles, Gary Bartz, Freddie Hubbard, Wynton and Branford Marsalis, Donald Harrison, Terrance Blanchard and so many more musicians whose names read like a proverbial encyclopedia of Jazz.

Mr Peterson also became a Messenger towards the end of Mr Blakey’s stratospheric career even holding down the drum chair on tour. It was a rare admittance into the inner circle for Mr Peterson and the lessons learned have lasted unto this day. Holding fast to the same evangelical tenets that made so many Jazz songs standard fare for generations Mr Peterson also brought not simply a unique perspective to the sound of so-called “hard-bop”, but listening to the repertoire on this high-energy and masterful live performances on these two discs you also get a sense that Mr Peterson is his own man, who has made unique use of instrument invented specially by and for the African-American music of Jazz: the drum-set. Listening to Mr Peterson play – yet again on Legacy Alive – Volume 6 at the Side Door, this two-disc set – you suddenly become aware of all of the angles he covers on his instrument – from making it sound like an elemental voice; a force of nature with his unique accents, and his line and angle of attack to the manner voice in which he makes each drum sing the lines of a song that have been assigned to it.

On song after song with chorus after chorus he makes a primal world come alive as if at the dawn of its birth, thriving in an idiom that is at once also contemporary, bluesy and accessible; a mix of soul, driving beat and fiery virtuosity which, in turn, propels this music – his music – into a dimension where it swings and rocks just as the music of the proverbial Jazz Messengers – that music that inspired Mr Peterson’s own music – did for generations since Mr Blakey first carved it into the edifice of Jazz. Like his sainted ancestor, Mr Peterson also solos with unrelenting fury. He does so in virtually every song – or at least so it seems throughout this welcome assault on the senses. And while proudly flying The Jazz Messengers flag, Mr Peterson also delivers on unique interpretations of Curtis Fuller’s “A la Mode”, Freddie Hubbard’s “The Core”; and Benny Golson’s “Blues March” and “Along Came Betty” and Bobby Watson’s “In Case You Missed It”.

However, this is no one-man-band. Mr Peterson also leads a group of formidable musicians through territory that is both familiar and challenging. And the musicians deliver on every front, bringing uncommon virtuosity to each chart and creating a shimmering aura around an atmospheric release. The music is vivid without the relentless torrents of notes, honking riffs and biting attacks. Each benchmark performance is informed by lithe and elegant sound that is warm, swinging. The tantalising symmetry of the melodic lines are only broken so as to launch a soloist on a celestial sojourn full of seemingly wrong-footed directions with unexpected turnarounds – especially on “Wheel within a Wheel”, for instance – that always land exactly right and – thanks to their fearless drummer and leader – with their own fascinating rhythm.