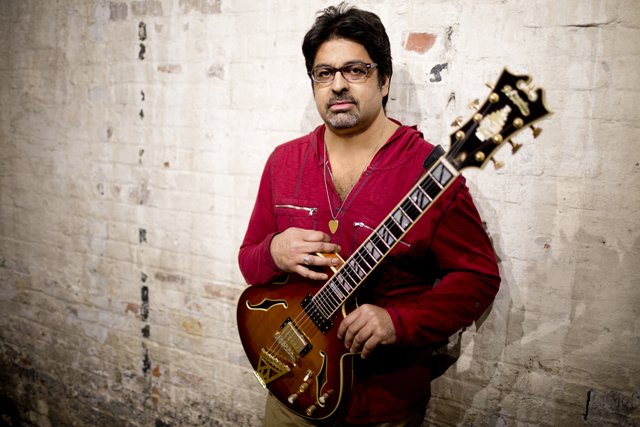 There’s no mistaking the extraordinary music of Rez Abbasi. His sound is just so unique that you can tell he’s playing just by a few melodic notes, a bar or so into some music he’s written and is performing. It’s the same whether he is playing electric or acoustic guitar. It’s as if the guitar =- the entire instrument – turns into his human voice with which he ”sings” the elementally twangy music as he picks his way through a tune – at some times, high and lonesome, and at others, low and almost spookily seductive. Whatever the register he is playing in, you can tell it’s him, telling a story you’ve never heard before, and upon hearing it for the first time you are left breathless by the liquid melody, complex and wondrous harmony and dancing rhythm.

Mr Abbasi is a consummate musician. His virtuosity is a living breathing thing. Notes leap and pirouette in the air around you meeting other notes. Together they dance in harmony, their dancing driven by the atomic rhythms from whence they – the notes themselves – were born. His music is drenched in an ancient tradition. But tradition, to Mr Abbasi, the inner dynamic of the traditions into which he has found himself is always to innovate. Both Eastern and Western traditions collide in Mr Abbasi’s music and he, being at the centre of it all has learned to address the resulting secrets from the very depths of music’s pathology and physiology. I can’t think of any other reason why he sounds unlike any guitarist playing today.

When he is not making music in one of many forums he creates or facilitates, Mr Abbasi also performs and acts as musical director for his wife the prodigiously gifted composer and vocalist Kiran Ahuwalia, whose celebrated music comes from both the Hindustani classical and western popular traditions. The year 2019, however, saw two smouldering recordings from Mr Abbasi. In one he brings together a small ensemble comprising chamber instruments from the Western tradition, Indian musical instruments from the Hindustani and Carnatic traditions and the drumset configured and played as the Jazz tradition would have it played This recording was released in October 0f 2019. In a recording released two months later he engages with the French harpist Isabelle Olivier. 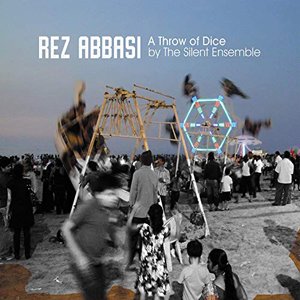 Rez Abbasi: A Throw of Dice This is the English title of the 1929 silent film Prapancha Pash by the German-born director Franz Osten (1876-1956). It is the final part of a trilogy based in the Indian epic, Mahabharata. Mr Osten made more than seventeen films (all Indian themes) and this one is considered his greatest achievement. The film has been restored and re-released more than once and the music for each re-release has been scored several times as well. Among them a celebrated (2006) score by the Nitin Sawhney, the sitarist-turned guitarist who plays an instrument uniquely crafted to incorporate the scales and harmonic reach of the sitar and veena.

Mr Abbasi’s instrument is nothing like the one played by Mr Sawhney. He is seemingly able to extract sound, modes and moods with a conventional acoustic (and, when his music calls for it, an electric) guitar. Although you will not have the benefit of listening to this music with moving pictures, you may not need to. Mr Abbasi’s score – as any music scored for a film – is meant to bring characters and narratives to life. Although this is not quite the same as “listening to an operatic score” in some ways it might be similar – at least in terms of the older versions of opera.

Song-titles cue episodes and it may be left to the imagination to conjure up the visuals, which may have been a hit-or-miss thing were it not for the titles themselves. Each sets up the scene and then begins to describe the mood and atmosphere, and – in this case because we are talking of a silent film – the very narrative itself. Mr Abbasi scores direct hits in every department, using scales, modes and chord sequences to shape characters, interaction and evoke the atmosphere that we (as listeners) miss because we do not view the visuals as we hear the music. Still, the act of listening can activate the wonders of the mind itself, causing it to dwell in an imaginary world – in this instance one that the film has created; one that we are not privy to, yet one that comes alive in Mr Abbasi’s score. 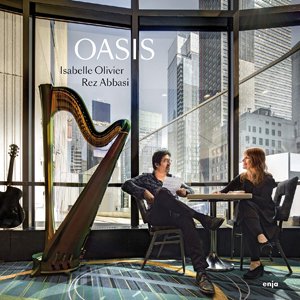 Rez Abbasi and Isabelle Olivier: OASIS It is fortuitous indeed that the word OASIS is actually an acronym for “Olivier Abbasi Sound in Sound”. This is exactly what we seem to have on this disc – something that emerges from the hearts of these two artists and forms a kind of dancing strip; a kind of musical DNA – a kind of polynucleotide that begins with guitar and harp but soon draws in the percussion colouorists in the form of tabla, a resonant kanjira and the rattle and hum of the drums as well. However, coming from the dramatically opposed traditions and cultural topographies as they do, Mr Abbasi and Miss Olivier bring completely different sensibilities to this music. When these sensibilities collide we have a musical experience that resembles something akin to the pouring of human emotion into a slowly simmering vortex.

The music from the harp flutters, reverberates and cascades in flurries of notes forged in of soaring glittering metallic musical smelter. As Miss Olivier uses the dynamics at her command damping softly and hard as she goes, melodies rise and fall, live and die always dancing the oddly interminable dance of music. When the harp encounters the guitar, Mr Abbasi’s notes seem distinctively darker, though not always. Chord structures – majors, minors and augmented chords – have much to do with this.

Following their individual ingenuity at this aspect of their musicianship Miss Olivier and Mr Abbasi create songs – little vignettes, really – in music that is infused with an intimacy and emotional intensity that can only be described as the poetry of feeling. This is what makes “My Favourite Things” so unique – different from how Rogers and Hammerstein conceived it, how John Coltrane perceived it and played it and how these musicians play it too. The presence of Prabhu Elouard is an overarching one, playing – as he does – the tabla and kanjira. The fat, round notes of the tabla add unique heft to this music – especially on “Road Movie” (which also comes with a fabulously enunciated and sung bol and solo tabla segment. But so does the guitar of Mr Abbasi and the harp of Miss Olivier – nowhere more spectacularly than on “Other Tones”.