Home Music René Marie: I Wanna Be Evil (With Love to Eartha Kitt) 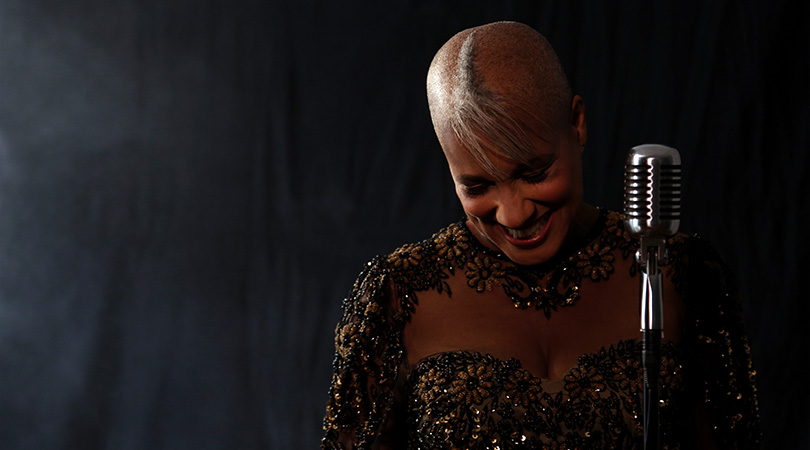 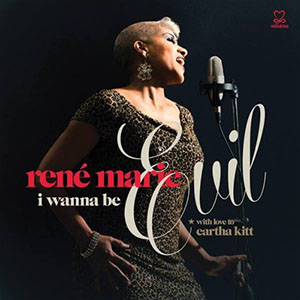 No one can forget Eartha Kitt, the African-American chanteuse, voice artist in animation films and actress on Broadway, in Hollywood, and perhaps most importantly an activist for perhaps as she was a performer—which is to say all her life. No one can forget her seductive voice and the distinctive singer that she was and it is for this that she is celebrated in I Wanna Be Evil (With Love to Eartha Kitt, a stellar tribute from a singer who has all of the singular characteristics to pay such an homage to that fabled star. That singer is René Marie. This singer appears to be virtually everything that Ms. Kitt was: an actress and writer, and a singer of immense potential. Ms. Marie, like the woman she celebrates here, is sensual and seductive, and she captures almost all of the energy and likeliness of Eartha Kitt on this beckoning album.

To sing as Eartha Kitt would, Ms. Marie has raised the level of her performance to one she will never now desert; she is engaging, mesmerising, husky and simply perfect. In fact if this were a role on Broadway, Ms. Marie would have been awarded an Emmy. She is that perfect. Ms. Marie was probably born to sing. It is hard to think of her as someone who has been coached, although it is clear that she has been trained to fine tune her abilities so that her enunciation is wonderful, her phrasing is fetching and full of surprise. She has a knack of hanging on to notes as if they were something delicious; to be savoured with almost sinful pleasure. These dalliances give her music something startling—a magnetic appeal that few singers can claim. This is something that is immediately evident in “C’est si Bon” and in “Santa Baby,” which are two of the charts in Eartha Kitt’s repertoire that defined her as a singer as well.

Another striking aspect of this album is the ensemble that has been brought together to support Ms. Marie in this musical quest. It would seem as if they are eminently equipped to make this music as memorable as well. Wycliffe Gordon, of course, stamps his soli with his unique manner of playing—sounding as he does, as if he were singing through the mouthpiece of his trombone. Both Adrian Cunningham—with his woody tone and lush colours—on clarinet and Etienne Charles, who literally burns through the score whenever he is playing paint startling images, as to pianist Kevin Bales. The bassist, Elias Bailey is absolutely exquisite; playing plump, ripe notes and dancing around chords as he fills the room with deep sound; and he is ably supported by a drummer who is all ears, plays with flair and eminently good taste.

It would appear that René Marie has now established that she can sing—and do so with beauty and magnetism. What will her next move be? That may be difficult to anticipate. This album will be difficult to top in terms of repertoire, character and execution. But then, while no one is looking and few anticipating, Ms. Marie might just as well write her own charts, assemble a group like this (if not this altogether) and stun the fans that she has made with this album. That would not be so much of a stretch: René Marie is made of music and that means she can pull one out of her proverbial hat without so much as batting an eyelid. Scores of new-found fans of serious music can hardly wait. Not for much longer.

Track List: I’d Rather Be Burned As a Witch; C’est si bon; Oh, John; Let´s Do It; Peel Me a Grape; My Heart Belongs to Daddy; I Wanna Be Evil; Come On-a My House; Santa Baby; Weekend.

René Marie – singer, actress, writer. Eartha Kitt – singer, actress, writer. Never before has there been a vocal recording tipping the hat to the divine Ms. Kitt and her fiery, sensual and clever interpretations of songs. With her incredible range of vocal ability, her powerful emotional resonance and strong independent streak, René is the right artist to conceive of this historic project, out November 12 on the adventurous, multi-Grammy®-nominated label Motéma Music. I Wanna Be Evil (With Love to Eartha Kitt) is René’s third recording for the label and her 10th career album.

Eartha Kitt’s daughter Kitt Shapiro, who maintains her mother’s legacy via EarthaKitt.com and the company Simply Eartha, expressed her appreciation. It’s wonderful that such a talented artist like René Marie has recorded the first tribute album to my mother, helping to keep her memory and spirit alive. These classic songs deserve to be heard and loved by all generations.

This brilliantly entertaining album burnishes René’s reputation as the most provocative risk-taker among today’s jazz divas. Featuring star turns by trombonist Wycliffe Gordon, trumpeter Etienne Charles and Australia’s Adrian Cunningham on saxophone, clarinet and flute, I Wanna Be Evil opens with a cackle of mischief. Then René tears into “I’d Rather Be Burned As A Witch,” a powerhouse song that immediately signals the melding of the spirits of two audacious women. She changes gears dramatically with a sly arrangement of “C’est Si Bon,” one of the songs most associated with Eartha. Lesser-known gems “Oh, John” and “Let’s Do It” follow, both of which René imbues with sultry affection. She puts her scintillating touch on “Peel Me A Grape” – featured on her 1998 recording debut – before giving a classic rendition of “My Heart Belongs to Daddy.” The title track is another barnburner that showcases René’s playfulness. The little-known Caribbean-tinged “Come on-a My House” – featuring a percussion turn by Charles – leads into probably Eartha’s best-known song, “Santa Baby.” René’s slow burn version is sure to become a new holiday favorite. She closes with her haunting original, “Weekend,” a favorite with fans, who adore René for her ability to enthrall. Produced by René and veteran producer/writer/programmer Mark Ruffin, I Wanna Be Evil features René’s longtime band: Quentin Baxter (drums, percussion, washboard); Kevin Bales (piano); and Elias Bailey (bass).

René too is unabashedly herself, winning many fans for her audaciousness but also receiving strong criticism. Her well-known medley of “Strange Fruit” and “Dixie” wowed many but also stirred the pot on America’s history of slavery and Southern race relations. Her choice to sing the black national anthem, “Lift Ev’ry Voice and Sing” (set to the melody of the “Star Spangled Banner”) when the Mayor of Denver John Hickenlooper asked René – one of Denver’s high profile resident artists at the time – to open the State of the City address in 2008 spurred a significant backlash, right wing criticism and even death threats. Yet René stood strong. Her daring makes her one of America’s most interesting and compelling artists. So do her influences. Her style incorporates a distinctly American mélange of jazz, soul, blues, folk and gospel and an innate theatrical ability to interpret a song deeply and live its truth. An actress as well as a vocalist, René will be seen Off-Broadway October 12-13 and 18 and 20 as part of the All for One Theater Festival at the Cherry Lane Theatre in a touring one-woman play she wrote, directed and stars in. In typical fashion, she raises eyebrows just from the title itself – “Slut Energy Theory – U’Dean.” The meaning becomes clear and intensely significant as the audience – and critics alike – find themselves transformed by her play about U’Dean, a woman on a painful yet sometimes funny journey from sexual abuse to self-esteem.

René also is a woman of great strength and humor who walked a similar journey. Married at 18, a mother of two by 23 and a Jehovah’s Witness, she only occasionally sang. When her husband of 23 years issued an ultimatum to stop singing or leave, she chose music over the turbulent marriage and self-released her debut Renaissance in 1998 and toured as Ella Fitzgerald in a regional play. She began experiencing a whirlwind of success rarely seen in the jazz world, winning over critics; receiving awards such as the Best International Jazz Vocal CD (besting Cassandra Wilson and Joni Mitchell) by France’s Academie Du Jazz; gracing the Billboard charts multiple times; and becoming a headliner at major international festivals. A gifted songwriter, her previous Motéma release, Black Lace Freudian Slip, features blues-heavy originals. Her label debut, Voice of My Beautiful Country, is an ambitious celebration of Americana and a striking display of her incredible ability to forge connections between songs most would never think to merge.

For René Marie, success means shining attention on important issues in America and on bold artists like Eartha Kitt who helped change America’s landscape for the better. René has become one of those bold artists. It’s hard to believe it all started after she turned 4.