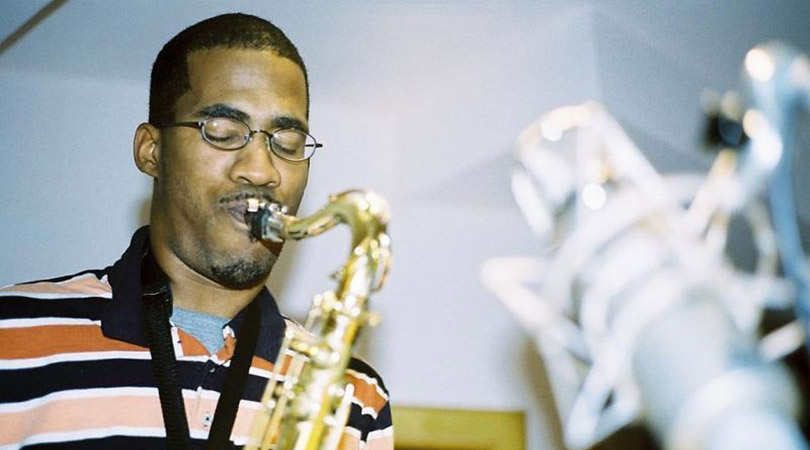 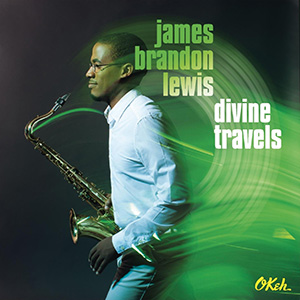 James Brandon Lewis’ inspired recording Divine Travels follows what would appear to be a series of bluesy, apocalyptic shouts and masterful honking following what is a long and deeply felt epiphany. That the revelation comes in the form of a mighty musical expedition is fortuitous as it reveals Mr. Lewis to be not only a deep and spiritual soul, which is really something lacking in musicians today, with the possible exception of Pharoah Sanders and the ever brilliant JD Allen. And this is more than likely James Brandon Lewis’ genealogy: that he has been musically begotten by men like John Coltrane, and Pharoah Sanders, but even more from Albert Ayler. Although Mr. Lewis never reaches the ecstatic intensity of Mr. Ayler, this young tenor saxophonist has shattered what might easily be considered a musical laissez-faire among too many young musicians who might be led to a musical precipice, but are too afraid to make the leap; afraid as the comfortable suits of the industry might penalize them for being too out there.

But as a young African-American artist (sic) James Brandon Lewis fears little. He has nothing to lose and everything to gain and it is to the Sony Masterworks imprint Okeh that Mr. Lewis is encouraged to write and play what his heart dictates and his soul proscribes. And Mr. Lewis does not disappoint in the least. His tone is broad and sweeping; it is to his credit that he has already developed a wry sensibility and is sometimes wickedly scornful and mocking when he narrates what he so poignantly states and sings. This is a sign of great maturity; which maturation is achieved by being flung down time and time again, yet standing tall each time to challenge and mock both shallow critic and adversary alike by going exactly where he was dared to go. Thus the tenor saxophonist is unafraid to play in a spiritual manner, his lines swaying with Holy Rollin’ fervour, mixing the blues shouts with shouts of hallelujah in “The Preacher’s Baptist Beat,” sharing the Word with the poet Tom Sayers Ellis. Nor is Mr. Lewis ashamed to hark back to the tradition where he certainly conjures up the spirits of John Coltrane and Albert Ayler. But is on “Wading Chile in the Motherless Water” where he most unshakeable and rock-steady in his majestic and melancholic tone, with the great William Parker providing the room for the young saxophonist to manoeuver his way into the spiritual dimension.

Quoting from “Sometimes I Feel like a Motherless Child” and melding the elemental sadness into the intense baptismal revival of “Wade in the Water” is a stroke of ingenuity. Here too James Brandon Lewis aligns himself with the masters of Gospel idioms that run contrapuntally with the mighty metaphor of jazz. Archie Shepp did this in two wonderful recordings with Horace Parlan and Mr. Ayler did something even more wildly ecstatic in most of his work. With anyone else playing like this it might have been tempting to cry Ecclesiastics and suggest that all is vanity, but in the case of James Brandon Lewis spirituality runs deeper than his soul. He is also a socially committed artist. Make no mistake about the meaning of “Organised Minorities.” It is no small matter of coincidence that his journey is bookended by “Divine” and “Travels,” something that is so ingeniously telling of this young artist’s musical spirit and intellect as well.

Even for an artist hailed by Ebony Magazine as one of “7 Young Players to Watch” who has studied with jazz heavyweights like Charlie Haden, Wadada Leo Smith, Dave Douglas, Joshua Redman, and Matthew Shipp, it takes considerable confidence and courage for a young musician to match wits with veteran improvisers like William Parker and Gerald Cleaver. But on his second release, Divine Travels, saxophonist James Brandon Lewis does just that, not only holding his own with that masterful rhythm section but leading them down fresh and unexpected pathways.

Divine Travels melds the holy spirit of a gospel service with the fiery expression of free jazz, the intuitive dialogue of skilled improvisers with the stunning invention of a first meeting. Lewis’ music draws in equal parts on his considerable studies and his roots in the church, as well as his considerable curiosity to discover more and deeper connections within his music.

Lewis’ unique stamp can be heard throughout Divine Travels, which results in Parker and Cleaver revealing new facets in their own strongly individual voices. Fragments of gospel melodies emerge and evoke starkly spiritual meditations in tunes like “Wading Child in the Motherless Water,” which weaves together the familiar melodies of “Wade in the Water” and “Sometimes I Feel Like a Motherless Child.” But even when not explicitly referencing such traditional fare, Lewis shows a predilection for direct, memorable folk-like melodies that he can then develop, evolve and explore.

The album also contains two collaborations with poet Thomas Sayers Ellis, who Lewis has been working with since the two met at a residency in 2011. The Brooklyn-based poet recites works from two of his books, Skin, Inc., and The Maverick Room, which won the John C. Zacharis First Book Award in 2005.

The title Divine Travels pays homage to Lewis’ belief that the music contained within is an expression of his own spiritual journey, marking both distance traveled and experiences yet to unfold.

Lewis’ own travels began in Buffalo, New York in 1983. Lewis was raised in the church, which formed the core of the saxophonist’s spiritual outlook. While many musicians are inspired by the church, Lewis says that it’s most important impact was not musical but personal, laying the foundation for his creative approach.

After graduating from the Buffalo Academy for the Visual and Performing Arts, Lewis attended Howard University, where he studied with Charlie Young, performed with the likes of Benny Golson, Geri Allen, and Wallace Roney, and backed John Legend, k.d. lang, and Vanessa Williams at the Kennedy Center Honors ceremony with the Howard University Jazz Ensemble.

In 2006, Lewis moved to Colorado and pursued a career in gospel music, working with Grammy® Award-winning singer Dorinda Clark Cole and the late “Queen of Gospel Music,” Albertina Walker. He relocated again to earn his Masters at CalArts, where he was mentored by Charlie Haden, Wadada Leo Smith, Vinny Golia, and Weather Report bassist Alphonso Johnson, who later hired Lewis to play in his ensemble.

Lewis released his debut album, Moments, in 2010, before moving to New York City in 2012. Since arriving in the city, he has performed with a wide range of artists, including Charles Gayle, Ed Schuller, Kirk Knuffke, Jason Hwang, Marilyn Crispell, Ken Filiano, Cooper Moore, Darius Jones, Eri Yamamoto, Federico Ughi, Kenny Wessel, Marvin “Bugalu” Smith, and Sabir Mateen, and has worked with the dance company CircuitDebris under the direction of Mersiha Mesihovic. He currently leads his own trio with Luke Stewart on bass and Dominic Fragman on drums.