Home Music Randy Weston African Rhythms: The African Nubian Suite
The corruption of today’s society thanks to the Euro-centric post-colonial, neoliberal model is so insidious that it does not stop at control of the mind, thanks to a white-hot stranglehold of media that perpetuates many myths and lies, but through all-powerful banks and ultimately a choke-hold on Euro-centric education as well. Adam Smith (despite Alexander Hamilton and, later Robert Southey, who called it ‘tedious and hard-hearted’) became the patron saint of Western Civilization from 1776 onwards. And despite the obdurate nature of Louis Seymour Bazett Leakey and other Europeans who tried their best to debunk the 1955 treatise The African Origin of Civilization – Myth or Reality by the great Cheikh Anta Diop, the Senegalese historian, anthropologist, physicist, and politician who studied the human race’s origins and pre-colonial African culture. But the name of Cheikh Anta Diop was not even whispered on American streets, much less in American educational institutions. Not in Randy Weston’s home in New York, though, where his Panamanian-Jamaican father taught him not only to respect the ancestors but being African born in America, to learn to love Mother Africa. ‘Love’ is a key operative word here and even through the gathering fury of his playing it is celebrated in his pianism and in his very nature as well. 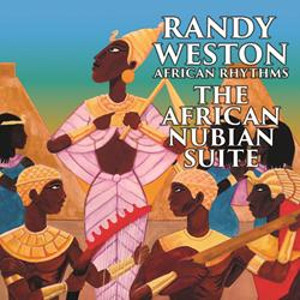 And so it would take more than the Black Panthers, more than Alex Halley, more than the Last Poets to rescue Black American Music from the hands of the sterile souls of men in suits. It would take the bluesmen: Huddie Ledbetter, Blind Lemon Jefferson, Son House and John Lee Hooker, and Buddy Bolden and George Russell, Louis Armstrong and Duke Ellington and the impeccable pedigree of Jazz ancestry that also led to Randy Weston to continue to break the pertinacious hold of rank commercialism on Black American Music. It would take more than the hatred of racism to break the Black American Musician in Randy Weston; to destroy the history of the diaspora of all humanity that was born in him. In fact it was that very racism that led him back to ‘Mother Africa’ and to inform his burgeoning oeuvre. Today there are few better documents of this that Weston’s monumental composition The African Nubian Suite, a sprawling tour de force that unites the entire human diaspora with Africa through words and music performed by a constellation of stars – from the Griot, Wayne B. Chandler and the late poet, Jayne Cortez to the great Howard Johnson, Gnawa, Lhoussine Bouhamidy; African percussionists Neil Clarke and his son, Ayanda Clarke, and kora player Salieu Suso, the Chinese pipa player Min Xiao-Fen and many more to bring not only Black American Music back to life, but also to draw attention to its indestructible roots in Africa.

Randy Weston conducts the suite from the piano, the stool on which he dwarfs also becomes his conducting platform. Although much of the mystical journey is in the hands of Wayne Chandler, whose excellent narration is altogether enlightening, it is the grizzled voice of Weston that brings the lived experience to the music and he connects the dots in his own life as he criss-crosses the music’s topography from the Mississippi Delta to Kansas City and New Orleans, and then from Tanzania to Senegal and Mali, from Mongolia and China to New York. All the while the music unfolds with beguiling improvisations by featured musicians, who are introduced and given a rousing send off by Randy Weston. The most iconic moments come when Weston stretches his long arms and elegant fingers towards the keyboard of the beautifully-tuned grand piano. Then, we are left breathless and gob-smacked as the notes and phrases mimic the heartbeat of African rhythms: the drumbeat of tribal ceremonials, the thundering herd of elephants, and the whispering leap of the gazelle as it sniffs a rain-bearing breeze. The roar of the lion and the slither of the snake inform the fury of his arpeggios and the electric energy of his dazzling runs. And in a magical wave of his hand that punctuates a mystical phrase the history lesson is brought to a close.

As a composer who has spent more than six decades writing extended pieces in praise of the African roots of the Blues and Jazz, Randy Weston has created a glorious repertoire. Although he is not alone in believing that the Blues took root in Africa long before it became known in America. But more than speaking of his beliefs, he makes these roots come to life in his music; for the Blues is much older, his music ‘sings’, than the call and response of the cotton fields and the elemental cries from the Mississippi Delta. It is the preternatural howl in the pangs of birth of Mother Africa where the Blues was heard at that primordial dawn, continues to be heard each day, and continues to be sung by the long, long line of Griots who are beholden to it, to history; who together with the healing Gnawas are always in the service of community. On The African Nubian Suite Weston invites Tanpani Demda Cissoko to do that singing even as his piano brings this aspect of the Blues to life. Moreover he has also added historic commentary by writer and narrator Wayne Chandler and a truly memorable poem by Jayne Cortez to the mix. Added also are magnificently written notes by Professor Robin D.G. Kelly. And when all of this is performed by musicians, each of whom tells and sings a chapter in a living history like a griot of old, something truly marvelous unfolds in an important and unforgettable work that will forever enrich the global library of music.