Home Music Keith Jarrett: A Multitude of Angels
The pianist Keith Jarrett is not simply ‘beyond category’; he is, quite simply, in a category all by himself. The only living pianist who comes anywhere close to doing for the music of the piano might be the French-Canadian classical maestro Marc-André Hamelin, who, like Jarrett, has played in both Classical and Jazz styles, but who has approached his music from an end opposite to that of Keith Jarrett, who is a Jazz maestro, who plays in the Classical style. However, Jarrett does something no other living pianist does: his vast repertoire goes deep into purely improvised territory, for which he relies entirely on ideas that become rhapsodic phrases and lines on the spur of the moment, with absolutely no preconception of what will come next out of his elegant fingers. This distinction is important because no musician – not even the Miles Davis of Kind of Blue, who arrived at Columbia with what he called pre-conceived ‘sketches’ of songs – has ever relied purely on neural synapses from the brain to the fingertips to create musical art. Even the great improvising Ukrainian/Russian pianist Nikolai Kapustin by his own admission, ‘writes’ his improvisations. 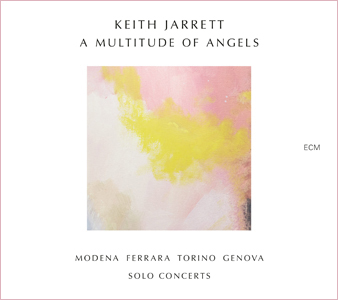 Music must come to Keith Jarrett as elementally breathing does. Almost everything he has played – and certainly on A Multitude of Angels – is sui generis in the purest sense of the phrase. In performance, the pianist arrives on stage, strict instructions having been given that there is to be no photography or manipulation of other electronic devices. He enters a stage right, or left as the case may be, and under dimmed lights, sets his lithe frame down on the piano with his hands on his lap. You sense only breathing until, almost imperceptibly, his hands rise from his lap and his fingers begin to caress the keyboard. It is as if the notes have been given life purely by breathing on them. Until, of course, the music grabs a hold of him. Then, like a man possessed, he rises from the piano stool as if from horseback riding the notes and phrases and the long, loping lines, urging them to go this way and then that, singing, noodling, cajoling and even reprimanding them as light and shade begins to shine out of the keyboard and living music is heard as if splashing out of a magical palette that seems to be the source of preternatural tones and textures.

Remarkably, Jarrett is a pianist who doesn’t necessarily need an audience to bring such magical conceptions to life. Like gleaming diamonds that may have been created by these musical equivalents of the metastable allotrope of carbon have been locked in the pianist’s brain, seemingly for an age and all he has to do is mine them from the deep recesses of his very large musical brain. Of course, his music sounds grand before an audience as it does in these Italian concerts, created in Modena, Ferrara, Tornio and Genova (Genoa). For someone so deeply spiritual as Keith Jarrett, he must have been ‘told in a dream’ that the cosmos was going to align its forces so that every not he was going to play notes in random order, but every single one of them would be in alignment with the next note, after note, after note, after note “…because I was busy playing as if it the last time,” he says in his notes. Certainly he plays every note as if his life depended on it. This would explain the perfect engineering on a recorder that Jarrett set up and manipulated to perfection so as to capture what went down. That happened between the 23rd and 30th of October.

Stricken with what can only be described as chronic fatigue syndrome Keith Jarrett stopped playing music for a long period of time until his wife nursed him back to health – something he celebrated with the recording, The Melody at Night, With You (ECM, 1998). Fortuitously Jarrett returned to this music in 2016, to find it was as perfect an example of what he does best as there could ever be. Retrospectively he believes that only ‘a multitude of angels’ (his wife included) could have been there with him and his piano during those fateful days in October of 1996. “They took their place aside of me and urged me, gently, to go on,” he says. Even though one has come to expect nothing but the most spectacular music from Jarrett when he sits down to perform in the studio or on stage, A Multitude of Angels is something that simply has not been captured on disc ever before. By his own admission, the pianist reckons this is “…the most extraordinary experience I had upon re-discovery of this music.” One can only imagine how breathtaking it must have been for the audiences of the day.

Throughout the four discs Keith Jarrett is in a musical state of grace. The audiences in Italy were lucky to have him on stage. His tonal sheen, wide dynamic range, ear for nuance and pinpoint technique make a compelling case for each work. His gaunt sonority, laser-like projection, finely calibrated articulation and uncanny rhythmic equilibrium convey blinding clarity and intense concentration at all times. The pieces – for they are not songs, except for the encores ‘Danny Boy’ and ‘Over the Rainbow’, which are incidentally, the only examples of composed music on this extended programme – are raised with total consummate skill to a heavenly realm and shine a light on Jarrett’s complete mastery of melodic charm and elegance. There is also nothing ‘usual’ or predictable either about Keith Jarrett or the kind of improvised music that is in evidence here. Only angels as multitudinous as the ideas generated on the spot by the pianist with a winning sense of precision and bounce as he makes less use of chords and rhythmic dislocation than any other pianist living on this planet, which produced the sheer beauty of tone, seemingly captured in a time-warp, engineered by the pianist himself on a recording device with absolutely miraculous clarity and presence.