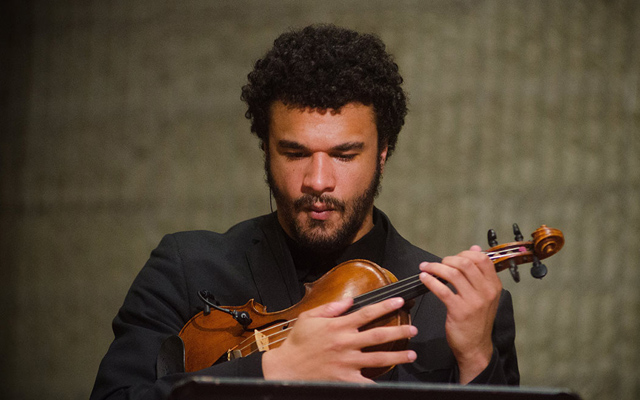 The best way to describe the effect that this disc, Of Colors Un|Folding by Curtis Stewart: spirited, occasionally restless performances that thrillingly capture the adrenalin rush of a concert on the ubiquitous violin. In his hands the instrument not only finds another dynamic soloist but he also reaches that part of the musicianly realm where few have had the courage to go. Stewart’s timbre has both sparkle and depth, and he is fully equal to the technical high-jumps that the demanding ‘Violin Sonata in G minor BWV 1001’ by Johann Sebastian Bach makes on him. Flexing his sinuous musicality even further, Curtis Stewart seemingly makes light work of Anton Webern, as well, using the great modern composer to leap-frog into the theme of his album. 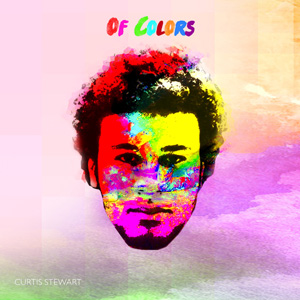 This repertoire contained within Of Colors Un|Folding, which might appear to be little vignettes, are actually dazzling, fully-formed short stories and tone poems, and are accompanied by quotations, arresting meditative poetry of his own making that dwell on and make for endless variations on the theme of ‘Color’. The following shred of a poem, from ‘Of Webern i:A Color Between Colors’, provides a tantalising portal into the composer’s mind: “the eye/is what separates…Loathsome to lie,/it enervates unending spectrum./Segregates light to rainbow/for human kind/for human mind,/for human power,/for human limit./…from Color(s) between Colors,/into seven false idols…”Metrically this is challenging even to the tongue and the ear. However in the context of Webern it becomes the shock of the new, as far from mainstream as verse could be and yet when read when the music is playing the apparent innocence of its aesthetic is totally compelling. One cannot escape the depth of meaning either, for we live in an age of ugly racism. Not surprisingly we also find this from Charles Mingus’ electrifying autobiography Beneath The Underdog: “I am Charles Mingus. Half-black man. Yellow man. Half-yellow. Not even yellow, nor white enough to pass for nothing but black and not even too light enough to be called white.”

Elsewhere Curtis Stewart tears apart ‘Giant Steps’, the iconic piece by John Coltrane. It’s subtly signaled during a ferocious introduction, he is joinmed by the ever-present Alex Wyatt as liquid streams of demi-semi-quavers gather into an on-rushing cascade, and reaches fruition only in the coda, which surges exultantly. In between, though, there’s an ebb and flow, a multiplicity of raging currents that are somehow contained as an uninterrupted unified body of the music that picks up from where Coltrane’s ‘sheets of sound’ leave off. There is much more to beguile the senses in between Bach and Webern. There are the moments during Outkast’s ‘Prototype’ when you are guaranteed to change of mind about what is familiar. Notable too is his breathtaking use of portamento in a breathtaking version of Arthur Schwartz’s 1932 song, ‘Alone Together’. The elastic qualities of the song are a perfect fit for a violinist such as Curtis Stewart because of his propensity to dive into the music and let things come almost subconsciously. Not only do we sense colour here, but a wonderful romantic quality of the music as if he has taken the music in one direction and then another like a boat on the sea.

By the time one gets down to Stewart’s original work on this album, one gets a sense that Curtis Stewart takes obvious pleasure in details without losing sight of the larger picture, whether it is through his violin or several others including beatboxing, a phrase, a movement or an entire work becomes fascinating to the ear. Indeed using what might be perceived as the musical version of the perfect sigh (Un suspiro) or the equivalent of an apocalyptic shout (harkening to those that came out of Patmos) Stewart brings a rare musical genius to sharply delineate the individual character of each of his works. Lyrical, vulnerable, confident, anxiety-ridden and turbulent, each piece displays the violinist’s seemingly limitless tonal palette as he aptly broods and frets, seethes and squalls so that what we encounter is an explosive album, rhythms bristling and dynamic contrasts starkly illuminated, and with dramatic thrust. It is a debut that every artist must surely dream of making.