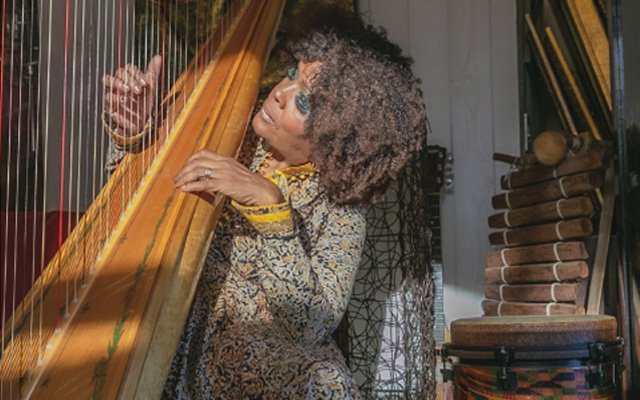 Black Spirituals, like those gloriously brought to life by Radha Botofoaina on Carry On: The Spirituals Vol. 2] are another genre of spiritual music [or music related to the Christian Church] – unique to the erstwhile Black Americans who crafted them from work songs, field shouts, and call-and-response style of singing that arose from the cotton fields. They have been sung ever since the first Africans were converted to Christianity by their slave-owners. Merging African forms of rhythm and vocal harmonies with Christian hymns the ancestors of today’s Black American musicians and composers sculpted this unique form of music based on their own unique relationship with the Christian God. 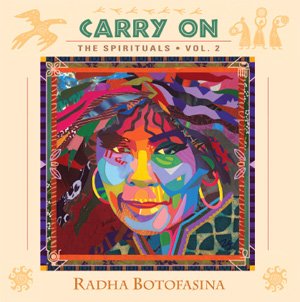 Despite the fact that the celebrated singer, harpist and composer has produced numerous albums she remains obscure in the mainstream of music. So much for good taste! However, now is the time for the discerning listener to catch up.

The singer applies her bounteous powerful gospel-infused vocalastics to the music on this wholesome disc. Each spiritual is based on Biblical stories made famous by Christian teaching in churches around the world. Miss Botofasina makes each narrative come alive as if she were a character in the story itself. In doing so she crafts poetic songs rooted in the ancient tradition. But she makes them absolutely contemporary – retelling them in her inimitable, questing voice. Opening the album powerfully by purging Satan from the air in our listening rooms, she goes on to tell – with melodious invention – the story of the Samaritan woman and her miraculous encounter with a thirsty Jesus at the well.

Miss Botofasina’s story of the Christic encounter between Jesus and the two sisters Mary and Martha “Mary Don’t You Weep” is intricately layered with bass and voices entwined with a wailing viola and hypnotic percussion. Other spirituals – “Going Back With Jesus”, “Mind on Jesus/God is God” and “Move On Up a Little Higher” – are richly expressive and gloriously fervent with their gospel shouts. The subterranean bass line is masterfully woven into the narratives as well.

The most rousing performance on the entire album is during “I Know The Lord Laid His Hands On Me”. It is a haunting weave of clustered lines suggesting heaven. Miss Botafasina’s voice is angelic. The aura is alternately hushed and urgent. The vocal choir on other songs adds a chorus of heraldic harmonics, thundering bass lines and rumbling percussion conjure the voice of the Divine in all His power and glory.

This is one for the ages…