Joseph Spence [1910 – 1984] was the legendary Bahamian musician; a brilliant virtuoso to ever pick the six strings of an acoustic guitar. As a vocalist, whose style can only be described as a vocal-juggler who alternated phonetic and wordless vocalastics with sublimely lyrical rhymes, Mr Spence was also a revolutionary artist of the first order whose prescient vocalastics prefigured so much of what is presently practiced by Jazz and Gospel singers in the USA and around the world. Viewed from today’s perspective Mr Spence appears to be one of those artists who could well have been an icon as he inadvertently created an revolutionary palimpsest for Black American music, “writing over” musical forms that spanned The Blues, Spirituals, Gospel and Jazz – all original forms of Black Music. 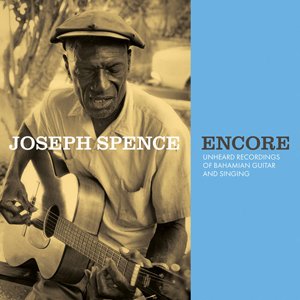 What the great Amiri Baraka [then writing as LeRoi Jones] in the 1960’s was not only historically correct in explaining how African Slaves syncretized their African forms of Divine worship into the White Man’s Christianity in nineteenth century United States but also utterly convincing about how – and why – the Black American created a wholly new form of worship, melding the secular – and proverbially profane “Work Song”– Classic Blues into what he [the Black American] imagined – again, uniquely – was a “Worship Song” – or simply “The Spiritual” – the Black American’s unique worshipping the Universal God.

“The spirit will not descend without song,” Mr Baraka explains, was “an old African dictum that very necessarily was incorporated into Afro-Christian worship. The Negro church, whether Christian or “heathen”, has always been a ‘church of emotion.’ In Africa, ritual dances and songs were integral parts of African religious observances, and the emotional frenzies that were usually concomitant with any African religious practice have been pretty well documented, though, I would suppose, rarely understood. This heritage of emotional religion was one of the strongest contributions that the African culture made to the Afro-American.”

Mr Spence was already well-loved and famous in the Fresh Creek Settlement on Andros, a relatively-unknown island known as “the mud” in the Bahamian archipelago. His day-job, as a young man, was a sponge-fisherman – a “sponger” as they were called in the early 20th century. But when he was aboard the boat that he dived, he would accompany rhymers on his acoustic guitar. His multi-voiced guitar style was shaped by his understanding of the distinct rhythmic and melodic played by the lead, bass and treble singers of the fabled rhyming tradition.

His music narrated tales, sketched people around him and praised his God above. In each instance he was unique, and his deceptively simple melodic and harmonic lines were, in reality, so advanced that – like that of Charlie Christian on electric guitar – it may take years for virtuoso guitarists today to catch up to his advanced musicianship. However, even if his style of playing the guitar is decoded and copied, his vocalastics – performed in a raspy, gliding baritone will almost never be imitated or copied. This is largely due to the fact that in his vocals both God and mere humans come alive as their spirits appear to dance in his flesh.

Sam Charters, who first recorded him in 1958, in Nassau, Cat Island and Andros for the Library of Congress was speechless when he first heard him. “I had never heard anything like Spence,” he wrote. “His playing was stunning. He was playing simple popular melodies and using them as the basis for extended rhythmic and melodic variations. He often seemed to be improvising in the bass, the middle strings, and the treble at the same time…. [While] he was extending the rhythmic possibilities of the melody, he kept the music solidly in place with the noisy tapping of his foot…. He growled occasional words and phrases of the piece he was playing, as much to help him keep track of where he was as it was to actually ‘sing’ something….”

Joseph Spence: Encore While the observation of the sound of his voice is an accurate account of what to expect from listening to the great Joseph Spence nothing can really prepare you for what you will hear on this classic collection of songs on the retrospective entitled Encore. Remember that apart from Alan Lomax who first made field recordings of musicians in the Bahamas in the early part of the 20th century, it was not until 1958 that we got to hear about Mr Spence from Sam Charters. He captures the sense of wonder at discovering the beautiful haunting sound of Andros Island and his first sight of Mr Spence with striking poetic imagery:

“When you go out into a new part of the world with a tape recorder to look for music you always dream that someday you might find a new performer who will be so unique and so exciting that their music will have an effect on anybody who hears it. One of the few times it ever happened to me was in our first few weeks in the Fresh Creek Settlement on Andros. We went out one day about noon…. Some men were working on the foundation of a new house, and as we came close to them we could hear guitar music. It was some of the most exuberant, spontaneous, and uninhibited guitar playing we had ever heard, but all we could see was a man in a faded shirt and rumpled khaki trousers sitting on a pile of bricks. I was so sure two guitarists were playing that I went along the path to look on the other side of the wall to see where the other man was sitting. We had just met Joseph Spence.”

The same incredulity of [Mr Charters’ sense of] “two guitarists… playing” is what you will hear throughout this performance. “Spence walked over to our little house, gathering most of the people in the settlement behind him. Since the house was too small for everyone to hear him play, we did the recording on the porch. He did a version of a popular island folk song to warm up and tune the guitar, and then, without stopping to do much more than laugh and joke with the women between the pieces, he recorded the instrumental solos that become the first Folkways LP…. When he’d played as much as he wanted, we paid him the little money we had and he walked off with the people who’d come to hear him, and for the rest of the afternoon he sat in the shade playing Bahamian checkers…”

There is sometimes rather fanciful talk that The Blues came from the Songhai in Mali. Actually, the term “originated” has been bandied about ever since the Malian “Griot” Ali Farka Touré was brought to the world [via Europe] by World Circuit Records. Remarkably this belief was embraced chiefly in the USA, where the hopeful longing of The Blues was, in fact, first heard. It was actually Mr Farka Touré who may have been responsible for that belief when he – upon first hearing the music of John Lee Hooker at a Festival in Mali – [famously] believed said: “The first time I heard John Lee Hooker, I heard his music but I said ‘I don’t understand this, where did they come up with this culture? This is something that belongs to us.”

But Mr Farka Touré’s own music – sensational as it is – has nothing of the “hopeful longing” of Joseph Spence’s vaunted spirituals, and secular Blues. Stretched over this sonic canvas of almost three-quarters of an hour, Mr Spence subverts the proud triumphalism expected of these sometimes sacred and celebratory, and always folksy compositions. His meditative inquest into the flow of time is like an anti-fanfare – a sonic séance summoning back the spiritual imprint of almost two centuries of sacred and profane music.

In songs where there is rigorous tension put between his soft-focus stylised mumbled and growled figurations and structural sleights-of-hand that appear to lend his rather Debussian turns-of-phrase subliminal muscle. [All of this is unconscious, of course.] A quite remarkable example of this would be “Out on the Rolling Sea”, which features Mr Spence’s unique rhyming style – heard here with his sister Edith Raymond, who ‘holds down a strong lead vocal beneath the rhyming’ along with several other singers who also participate here. The balance here is perfect. Mr Spence gives the impression of a complete improvisation.

Perhaps this is only part of the Joseph Spence “song re-imagined” story. Somehow, the idea – in the context of Mr Spence’s music could imply that improvisation somehow equals randomness, when in actuality that is not entirely true. Improvisation can impose order too; Mr Spence’s meticulous, open-ended structure instead reboots itself on the fly, using intricate lines, finger-picked in his own, inimitable manner as melodic, harmonic and rhythmic landmarks. This illusion of improvisational spontaneity is, indeed, very composerly. And Mr Spence is supremely confident enough to carve the musical space up like dislocating procession: tinkling and twanging percussive charms rise and fall back into the silence that birthed them, held in place by a freewheeling logic.

But the windows of structural solidity are mirages [listen to “The Crow”, or “Bimini Girl”; “Great God What Do I See and Hear?” or “That Glad Reunion Day”] that otherwise keep you alert and listening precisely because there isn’t much more than the sound of lyrical rarefied air to hold on to – it’s an invitation to listen hard and lose yourself in the sound and time. The harder you listen, the further you lose yourself. Each harmonic and rhythmic sidestep loaded with inference, is a shock. There is also a dynamic detail that Mr Spence ;lavishes on “Run Come See Jerusalem”; the ardent power of the performance rhymes nicely with a suitably stoic finale here.

This repertoire is one for the ages… a classic reminder of that old African dictum that “the spirit will not descend without song” and that in all of this repertoire by Joseph Spence, indeed, the song goes up and spirit descends and is omnipresent on this album to absolutely die for.