Home Music Planet D Nonet: Blues to be There – A Salute to Duke...

Duke Ellington was a star who fell to earth, a pianist, bandleader, pioneering musician and composer, who – with Billy Strayhorn – swept all before him with the possible exceptions of Sidney Bechet and Louis Armstrong. But a master of all he surveyed – and played – he ruled music for decades and his music and nobility continue to resound and be celebrated wherever fine music is played and danced to. No bandleader has ever been accorded such extravagant celebrity. And here, in the sweeping programme on Blues to be There by RJ Spangler and his fine ensemble – Planet D Nonet – the famous ghost of the legendary bandleader has been raised once again. 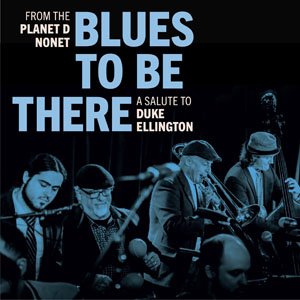 It may not be hyperbole to state that all he items – both familiar and no so familiar – on this disc are finely cut and polished diamonds. Indeed the ghost of Mr Ellington hangs heavily over several charts, especially the ones where we are reminded of the brief flurried piano gestures – by which the piano-playing leader is best known either because they were secret cues to alter phrases, or introduce a soloist, and here played to perfection by Michael Zaporski. And while there may not be the airy, patrician introductions of soloists [often beginning with that salutary “Mr…”] you get the feeling that this is a fine homage to The Master.

The genuine – and rare – jewels include Mr Ellington’s Moon Maiden – a vocal feature for Tbone Paxton, and which also features soli by 2nd trumpeter Charlie Miller and pianist Mr Zaporski – and Way Early Subtone – featuring soli by alto saxophonist Alex Colista and the guest baritone saxophonist, Alex Harding – as well as the poignant Purple Gazelle – with growling clarinet by Christopher Tabaczynski, and soli by 1st trumpeter James O’Donnell and Mr Tabaczynski who returns on tenor saxophone. Billy Strayhorn’s snarling Tigress is another marvelous feature – for the bandleader, Mr Spangler – as well as Mr Tabaczynski and Mr Colista.

While we remember – with the greatest of fondness – is the mastery of Duke Ellington and how he ruled music for decades, what is also unforgettable are the performances of a superlative technique and musicianship. Moreover, while each of the performers displays exceptional reading skills, what one can’t stop marveling at is how idiomatic this performance is. Clearly this cannot come merely from interiorising of music alone, but also the uncommon musicianship of each of these performers. Most of all, RJ Spangler deserves to take a bow for keeping it all together with the kind of dignity that Mr Ellington deserves… always and forever.