Home Music Philipp Gerschlauer, David Fiuczynski, Jack DeJohnette, Matt Garrison, Giorgi Mikadze: Mikrojazz! Neue...
The title of this recording Mikrojazz! Neue Expressionistische Musik does more than simply create a new kind of expressionism, but – much more – in the wave-like phrases fluttering out of the bell of the alto saxophone of Philipp Gerschlauer and the undulations of David Fiuczynski’s airy guitar a kind of living, breathing new music takes flight. This is music that is redolent of often ecstatic earthy celebration; a coming together of the natural and the supernatural worlds. It is thrillingly sensuous music of bright acoustic (electric and electronic) colours and resonant fades.

If the ghosts of Gérard Grisey and Olivier Messiaen are sometimes conjured here, so also is that of ‘Trane and Xenakis, Boulez and Stockhausen. The musicians performing on MikroJazz are obviously inspired and so the dots, diagrams and field-maps leap off the page to come alive. 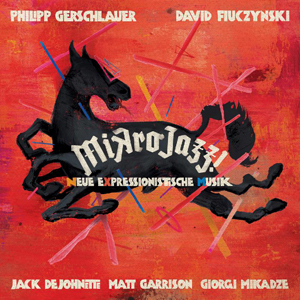 Detailed work is employed on note duration, attack and intensities and the electronics are minimal and subtly employed. Consider, as proof, “MiCrOY Tyner”, which – despite its whimsical title – proceeds to paint, with sound, a sort of portrait of the ‘colour of time’.

Here also – with special splendour on the overflowing, blinding and near-unlimited joy of “LaMonte’s Gamelan Jam” – is a sense of cosmic abundance and energy, communicated by guitar, saxophone, bass, drums and ‘microtonal’ keyboards, the sense that many more players and instruments are involved. This is as a sense that a myriad musicians are creating spontaneous, dazzling pulsating movements with a cumulative power that is overwhelming. It is in this and oher songs that we become seduced by the kind of dance of unbounded joy, which is rare of our time, as well as for a RareNoiseRecords record where music is uniformly beautiful, always affectingly present, yet sometimes feels laden with overhanging foreboding.