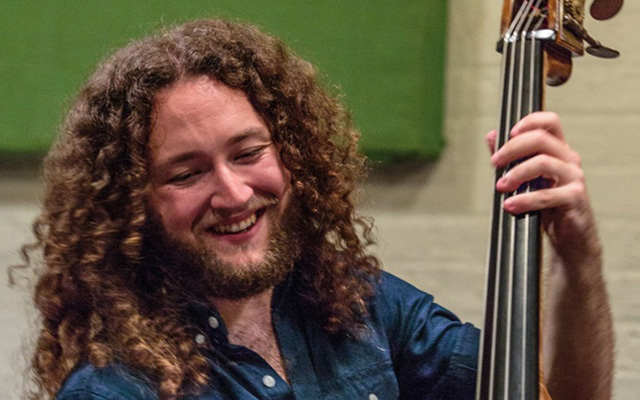 Some of us can no longer read the word “West” without associating it with long riders on stallions wearing 3-gallon Stetsons, attired in jeans and leathers and wearing Colt Dragoons or some such side-arm, carrying Winchester’s or some other shotgun… murderous ‘damn Yankees’. Blame John Wayne, or Jack Palance… or perhaps Gene Autry, or even Clint Eastwood and Sergio Leone. And even when you take away the hardship, black-balling of the Native American and all round gratuitous violence of the experience of the obligatory ‘Western’, something romantically adventurous always seems remain. Some of this romanticism remains (in) In the West the title of this album by the incredibly talented bassist Max Johnson…

Sonny Rollins also made a record called Way Out West which was titled as such more because it was the tenor saxophonist’s first recording on what we now call the ‘west coast’. And there could well be some association with Mr Rollins’ album on Max Johnson’s. But there is much more and although it appears prompted by the ‘romantic’ nature of a western swing, the fact that it finds the musicians also ‘blazing a new trail’ – a popular epithet 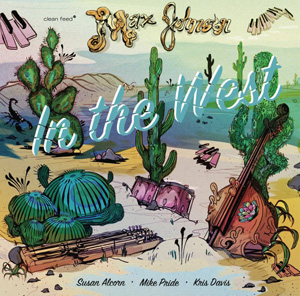 associated with ‘the Western’, is probably a more important aspect of this music, which is contained in just four songs including one – “One Upon a Time in the West” – by Ennio Morricone, famous for his scores for Sergio Leone’s iconic filmography.

The song by Mr Morricone famously graced a movie of the same name which starred Henry Fonda and tough guy Charles Bronson, with Claudia Cardinale, Jason Robards and Gabriele Ferzetti. On this version by Max Johnson “Once Upon a Time in the West” is virtually unrecognisable. The melody is not very prominent and Mr Johnson ingeniously employs the guitarist Susan Alcorn to ‘do her thing’ on pedal steel guitar, while Kris Davis, a marvellous young pianist allies herself with Miss Alcorn, Max Johnson and drummer Mike Pride as the quartet build on the guitarist’s forthrightness with earthy idealism, central to which is the song’s melody – one that becomes all about the belief that art should become part of the fabric of humanity for anyone who going to allow life to happen via art.

This performance – including those on “Ten Hands”, “Greenwood” and the extremely witty (not only because of its title, by the way) “Great Big Fat Person” – gives new meaning to a song that, like all those others in Mr Leone’s films, seemed to pour oil on the flames of ‘action-orientated’ western genre. And while Max Johnson and his musicians’ performances are triumphantly ballsy and drawling the fire is focussed on tonality rather than violent dissonance, on subtle colour, light and shade, and in the case of every musician, on the sublime mastery of instrumental timbre, thus making the best use of virtuosity, but, happily, never ever at the expense of this wonderful music.