Home Music PC Muñoz: Physical Science
PC Muñoz is not like other drummers. Sure he makes his drums waltz and tango; and also performs a myriad of other dances on his drums. But he can also make the instrument do what it has done for ages: he can make them talk. In many ways the title Physical Science is wholly apt. It matches the style of Mr Muñoz, which is palpably big, somatic and visceral, redolent of resounding thuds that vibrate in the core of the listener’s being. There is also a sense that note values are carefully considered and, magically, always seem to be in synch with the heartbeat, which can be death-defying at times – especially when the drums seem to mimic cardiac fibrillation. 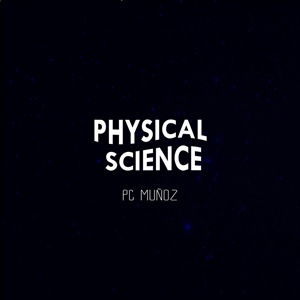 All of this makes Mr Muñoz a fascinating percussion colourist and a very astute manipulator of rhythmic textures. Listening to Physical Science, of course, one will be awestruck at how the calculated and the primordially elemental comes together in a songful manner. The glue, of course, can be dramatically varied. For instance, as the drum speaks and sings, Mr Muñoz adds his lyrical poetry into the musical “text”, using his own voice in both foreground and background with recitatives such as on “Physical Science” and most viscerally on “Rugged Individual”. Elsewhere, a theatrical performance is heard with Bryan Dyer doing the recitation on “Who Will Bury Me?” Kyle Bruckmann’s English horn makes radiant and powerful statements on “Motion” and “Abyss” and he is joined on the latter by Willie Samuels’ samples, while Miguel Muñoz’s harmonica wheezes melodically in “Wrong”.

Through it all, Mr Muñoz’s drums and battery of other percussion and electronic instruments reigns supreme. Their music dances and sings. In doing something we rarely hear from drummers, each percussion instrument when beaten, stroked and caressed seems to “recite” its own poetry to round off the “music” verse after verse. Mr Muñoz is, of course, also a poet and his slender book Inside Pocket of a Houndstooth Blazer adds more than a delightful whimsy to this package. The lyrical poetry of the book – and its prose poems and other seemingly unclassifiable material – is essential to the enjoyment of the music. Beautifully designed and illustrated by Lindsay Santiago adds much value to an already significant performance by PC Muñoz.