Home Music James Brandon Lewis & Chad Taylor: Radiant Imprints
James Brandon Lewis has been doing something that many – very accomplished (even great) ones – do not or cannot sustain. Mr Lewis can play and sustain long and breathtaking cadenzas, the kind of which you will have only heard lately, at least, from Sonny Rollins. Radiant Imprints is replete with this. Actually, because Mr Lewis’ only partner on this date is the prodigiously gifted drummer Chad Taylor each of the charts sounds as if it is an interminable one. 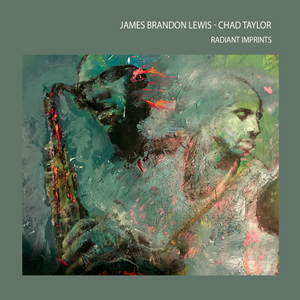 Remarkably, though, Mr Lewis is extremely “songful” in his endeavors. Each of his works has a distinct beginning, middle and end, so essential to maintaining the classic form of the song. However, it is what happens after a particular theme or opening statement has been made that things get even more interesting. For instance, not only does Mr Lewis pick the precise moment to begin his mighty improvised excursions, but once he does the ideas seem to flow one after the other; or rather one into the other, making it feel as if an invisible sluice gate was suddenly opened and an ocean of melody gushed out. This is certainly the hallmark of someone – a musician – who has not only found a way to tap into a well-spring of musical ideas, but having done so, he activates it so that the riches spout forth with vortex-like intensity.

Mr Lewis has found a willing and eminently able musical in Chad Taylor. The drummer always seems to have it in him not only to create a groove, but also keep it loose so that should ideas require subtle shifts in tempi and even harmonics, Mr Taylor is able to be there in a flash, ready to drive harmony and rhythm in a fresh direction. On the beautiful and sonically dark “With Sorrow Lonnie”, both Mr Lewis and Mr Taylor use John Coltrane’s “Lonnie’s Lament” as a leaping-off point to soar into places you might never have thought possible after ‘Trane had, in fact, written the perfect eulogy. But Mr Lewis and Mr Taylor are able to surprise you. Mr. Taylor also shows here that he is also a fine percussion colourist as he uses the radiant spring-like notes on the mbira to shine a light on what is essentially a rather gloomy piece.

The tenor saxophonist and drummer spring the opposite door to perception on “Radiance”, where, inspired by and quoting Mr Coltrane once again they now turn their tonal and textural palettes to bring a gleam to the music. An air of mystery is also prevalent throughout the recording. Song titles add to this with their own cryptic rhythms conjured up by the names themselves. And then there is the fact that you never know where the music will go. Still a considerable degree of balance and integration of melody, harmony and rhythm, of composition and improvisation, of exploration, individuality and tradition is impressively maintained throughout.

More about James Brandon Lewis and Radiant Imprints is available at www.jblewis.com