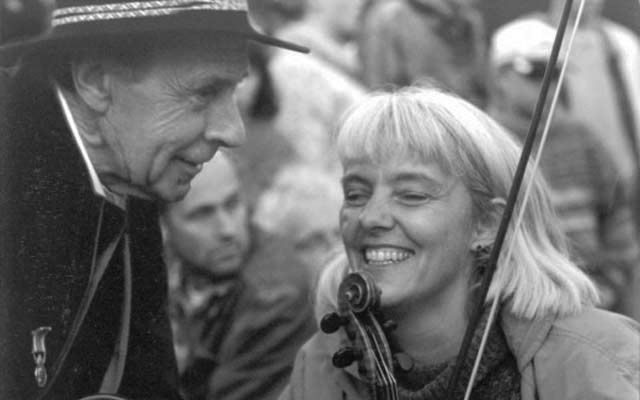 A particular coup of this disc is that its engineers have managed to secure a tape—two tapes actually—of the exquisite violinist Swedish Ellika Frisell with the near-reclusive, legendary farmer and musical genius, Päkkos Gustaf. The latter has been a repository of learning and Swedish musical history that he appears to have stored in his folk forms. Such is his fabled status even today that it will take years before most musicians and aficionados of his work to catch up to him. Fortunately Ms. Frisell did and in 1998, with the help of Bill McChesney, made these field recordings. Then with some magical work by the drummer, label and music pioneer Bengt Berger and Sigge Krantz, The music was prepared for record. The result is what I have in my hands, a magical, almost mystical set of music that simply soars beyond the pale. 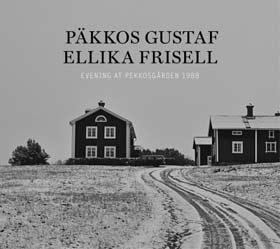 The music on Evening at Pekkosgården 1998 (Pekkos’ Farm) is at once robust and earthy, and delicately characterful. Päkkos Gustaf and Ellika Frisell are at the top of their respective games. In the solace of an old farm, I suspect that nothing was held back. You discover polyphony as you have never heard before. The effect is rather like a thin coat of varnish over a picture in which every detail of light and shadow has been finely balanced. In fact, so pointelistic is the musical material (and the photograph of the proceedings) that you feel you must hold your breath while listening to the music for fear that even as a listener you might intrude on something just perfect as it is; music so sacred that it appears suspended in time.

Both Päkkos Gustaf’s and Ellika Frisell’s tempi can be recommended as canonical to students of this music. The polska and vals vignettes unfold with excitement and virtuosity. But they never feel in the least bit forced. The vals music walk pirouette with a stately but never pompous of languorous pane and the polska have a wholesome vitality but never run away in a frenzy. And each of the musical essays are spacious without succumbing to morbid introspection. Ornamentation is generally light, precise and unfussy. The introduction and addition of simple passing tones and repeats always result in something wholly imaginative when all is said and done. The diverse articulations of the two musicians stand out as sensitive melodic paintings. Some are so vivid and upbeat that they seem playful romps the verdant fields just outside the room where the recording was made. I am reminded of the pictures of Pieter Bruegel.

So what’s going on here is a meticulously crafted and thoroughly attentive music-making by each musician with the other in mind. It is even conceivable to imagine that while nothing much may be said (in terms of instruction) everything that matters is understood and the music bears this premise out. There is also a certain determined inclination and self-control at times, but mostly it is a session where proverbial hair has been let down without self-consciousness. And as a result the music sounds not merely memorable but soaring. The gathering nature of its acceleration makes for expressive power and careful use of small agogic accents that express clarity of line, all coming together in something broad and magisterial, and quite grand.

The legendary Gustaf Päkkos (1916-2000) grew up and lived his whole life in the Swedish village Bingsjö in Dalarna. He was a fiddler and a farmer at the Pekkos farm.

Violinist Ellika Frisell is also a singer. An adventurous musician she has been playing as a duo with the kora player Solo Cissoko for several years.