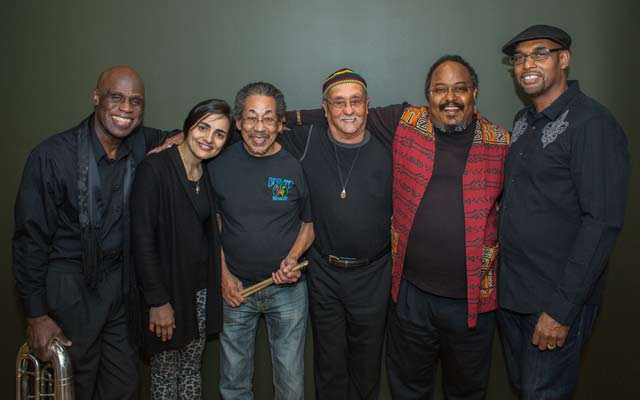 Listen to Bill Cole—no matter what reed instrument he is playing—and you will never be the same again. The basis of his beautiful tone lies in his ethereal breath control. Now the breath is the most important element in of his playing. Without it he would have had nothing. Breathing has enabled him to master the art of breath control. Mr. Cole’s breathing to play the nagaswarm, for instance, is totally different from his normal breathing. He breathes quickly, taking in a large amount of air. Then he exhales the air over a period of time, pushing it out with his abdominal muscles, often holding his breath in pure anticipation of what will come next. But there is more… 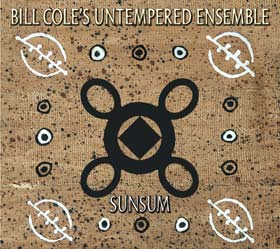 Something in Bill Coles playing reminds me of ‘prãnãyãma’. This is a Sanskrit word meaning “extension of the ‘prãnã’ or ‘breath’ of more accurately, “extension of the life force”. The word is composed of two Sanskrit words, Prãnã, life force, or vital energy, particularly, the breath and “ãyãma”, to extend, draw out, restrain or control. This is elemental, visceral… Ancient sages who sat in the upper reaches of the Himalayas practiced this—some playing the nagaswarm. And this by inference is the sagacity with which Bill Cole plays his myriad of reeds and double reeds, ‘breathing in pure anticipation of the final recording, with his ability to take your breath away.

Sunsum is such a recording. Again, “Sunsum” is believed to be one’s spirit; this by the by the Akan people of what is now Ghana. I must make the distinction here: this “Sunsum” of Bill Cole’s Untempered Ensemble is good ‘sunsum’ (as opposed to bad ‘sunsum’ which makes one kill). However, Bill Cole does not walk a fine line here. He is quite clear what his Sunsum means: “the essential nature of man”. And more importantly: “symbol of purity and spirituality”. Recognising this he lays down the law in his music. And he does so not just in the titles of the pieces in this suite of songs: “The Dove Finds Peace Everywhere”, “Great Loss Is Yours If Your Love For Another Is Not Returned” and “A Scar Is Never So Smooth As Natural Skin”, and so on…

Mr. Cole heralds this good “sunsum” in the music as well: Track 1 is what sets the scene. It suggests a certain sense of swagger and ebullience. It is music intended to foretell of what is to come. And Bill Cole’s response is to play gently, with a tender-hearted response. Track 2 is a warm tonal blend for the first statement from the whole ensemble. Here our protagonist is in full flow. In track 3, Bill Cole flies off vivace that is accompanied by the thunderous winds of Joseph Daley’s bottom interments. This is supported terrific energy and a really tight ensemble. Again, the great percussionist Warren Smith is the glue that holds it all together.

Track 4 is a bittersweet episode. Bill Cole is sounding sad here, and wistful and other-worldly, the winds of Mr. Daley and Ras Moshe taking turns to trill their comforting responses. And finally there is track 5. This is a sort of ‘finale’. It is by turns fierce, a percussive battle between soloist and ensemble. Mr. Cole and his reeds collaborate with the ensemble often breaking off for some tender dialogues. Again, the thunderous percussion of Warren Smith acts as mediator pointing to Mr. Cole, then to someone in the ensemble and back and forth until some resolution is achieved. An unsettling alarm (a brilliant solo with its portend: The Star Spangled Banner) towards the end of this finale on the nagaswarm is a good sampling of the starkness of the writing (throughout), with fabulous playing from Bill Cole’s Untempered Ensemble.

Track List: Grounded; The Dove Finds Peace Everywhere; Great Loss Is Yours If Your Love For Another Is Not Returned; A Scar Is Never So Smooth As Natural Skin; Evil Sown By A Man Will Grow On His Children’s Heads

The Untempered Ensemble was founded in 1992 by Bill Cole as a trio. The first members of the group were Bill Cole, Warren Smith and Joe Daley. Later, in the 1990’s, bassist William Parker and multi-instrumentalist Cooper-Moore joined the group. Soon after that, the reed player Sam Furnace was asked to join and then, at the end of the 1990’s, Cole’s son Atticus became a member of the group, playing hand drums. This group recorded four CDs for Boxholder Records during the early 2000’s and gave numerous performances, including at the Weil Recital Hall at Carnegie Music Hall in New York. Read more…