Home Music On the Corner Live! The Music of Miles Davis

Miles Davis once said, “I have to change. It’s like a curse.” Of course he didn’t mean that he was under a hex. He was referring to impulse to evolve, much like the larger human family. The only difference was that Mr Davis evolved over a much shorter period. Over that time he also formed some of the most enduring relationships in music; some of which affected his musical associates in an existential manner. This, in turn, gave those who’d shared a musically intimate relationship with the trumpeter a wholly new perspective – indeed a wholly new philosophy – on music. Dave Liebman was one of those musicians. Mr Liebman shared music with Mr Davis through his perceptual electric adventure. There may have been a number of other musicians who also shared this plane with Mr Davis, but somehow – perhaps because there was a kind of unspoken “Brotherhood of The Horn” at work here (something Mr Liebman also shares with John Coltrane, through artistic vision) the effect on Mr Liebman is a lot more visceral; the impulse to change and shape-shift musically being similarly evident in his (Mr Liebman’s) music. 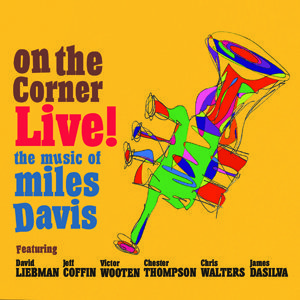 One of the most elementally exciting encounters between Mr Davis and Mr Liebman has been preserved for eternity on Mr Davis’ albumThe Complete On the Corner Sessions the entire sessions of which are available (Columbia/Legacy, 2007). The essence of Miles Davis – if ever there was something like this existed no matter how ephemeral – was always mirrored by the essence of Jazz music which meant that the musical dynamic – its harmonic and rhythmic concepts – were in a perpetual state of flux. And few things represent this musical ethos better than the music of Mr Liebman, which comes together with the genius of another (younger) adherent to the faith, Jeff Coffin. In fact it appears that this homage to Miles Davis was conceived of by Mr Coffin, who brought on board Mr Liebman, the one music who could meld the sense of living history of the music with the elements that made the music of Mr Davis’ ultimate period in music forever enduring. Of course, Mr Coffin also peopled this viscerally exciting live recording with other like-minded musicians, capable of capturing its enormous power. And so the drummer Chester Thompson and the prodigious bassist Victor Wooten have also been joined by keyboardist Chris Walters and guitarist James DaSilva.

It bears mention – albeit as an aside, perhaps – that Mr Davis’ group(s) of that period had multiple keyboards players, bassists, guitarists and percussionists often playing together to achieve what Mr Davis had envisaged. Equally it is worth noting that this band only doubles up on the horn section. This is remarkable not only from a discographical/historiographical perspective but speaks essentially to the unique conception of this repertoire. Mirroring the “epistolary of Miles Davis” there is only a suggestion of Mr Davis in this music, which – again, in keeping with the ethos of Jazz – is music of a dramatic and elementally shape-shifting nature. Only musicians who genuinely envisage their art as being a part of the greater, musical continuum could have pulled this off in such a manner. This points not simply to performance, but to conceptualisation in the first place. And who better to conceive and execute this but a horn player who can give it context and extrapolate on its linguistic dialects as well but Mr Liebman?

Mr Coffin must be credited for his larger than life role as a producer, which speaks to the manner in which this recording has been conceived and also executed. Its dramatic looseness is reminiscent not only of that particular “Miles Davis” period, but also speaks to the ethereal evanescence (Something Eric Dolphy also once spoke prophesied) of the music itself. Both Mr Liebman and Mr Coffin maintain this feeling throughout the recording. It is one that seems to suggest something utterly magical is always about to happen which leaves you on the edge of your seat, waiting for a clue as to when it’s going to. The pregnant pause, when the beat is left in the air for just a fraction of a second by Mr Thompson’s downstroke, and/or the gasp of one of the horns, or the nebulous vibration of Mr Wooten’s plumpest note way down on the lowest register of the fattest string; all this contributes to that magic that keeps unfolding form song to song and within each song as well.

Meanwhile we are also treated (you almost don’t notice because Mr Liebman has prepared you for it right out of the proverbial gate) to some of the great music of those fabled On the Corner that Mr Davis laid down between 1972 and 1975. Both Mr Walters and Mr DaSilva are masterful in their approach to and manipulation of the edgy electronic attachments that propel their respective instruments. This is exactly how seminal songs such as the Hermeto Pascoal penned gem “Selim” and Mr Davis’ “Mojo” and “Jean Pierre” evoke the thunderous power and Miles Davis’ celebrated “electric” period. Long after this dutifully long recording winds down – or rather evaporates and disappears into the atmosphere – we keep feeling the energy of its juggernaut which is no doubt created by all the musicians, the vortex of which definitely lies in the performance of Mr Liebman, who has lived through that epoch to tell the proverbial tale once again with feeling.