The free improvising guitarist Dom Minasi has made a poignant recording in order to remember Cecil Taylor. This is so because Mr Minasi has chosen to remember the great free improvising composer and pianist the way in which he would have liked to be remembered: as someone who’s embodied the poetics of music which is that lofty ideals of art that found expression in spontaneity, lyricism and dancing rhythms. An articulate musician, Mr Taylor never failed to let it be known that ideals expressed in dancing rhythms and motifs were what kept him in the practice of his art throughout his life and attracted him to music be it what was expressed in the tradition as well as what constituted the new tradition ignited by the avant-garde which he led from the front. 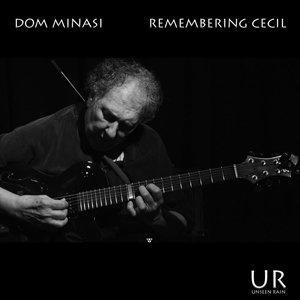 Mr Minasi’s four improvised segments attempt to remind us of Mr Taylor’s whole world and the architecture of each work is like a giant slab of sound that is shaped and erected as if to construct an edifice by which not only Mr Minasi would remember him, but so also would we in listening to this music. Each improvisation is like a stratum made up of dyads, triads and bent notes, and as these black dots leap off the proverbial page they appear placed in a manner so as to create an arrhythmia made up of gestures and phrases that tower as if in a Babel-like poly-linguistic manner which resembles an architecture that is eerily similar – at least in a reverently dedicatory way – to what would constitute a musical monument to the pianist.

The improvisations separately and together are constantly shifting; their dynamism suggestive of the proverbial dance that Mr Taylor always wanted to suggest. The shifting relationships evoke the massive natural forces that shape Mr Taylor’s revolutionary work. Sometimes strata stack up immensely; at other moments they thin o the most diaphanous textures; but always there is sense of returning to the same point, only to discover that the perspective has changed in the interim. On top of these seismic musical processes, Mr Minasi creates a virtuoso guitar-performance superstructure whose riotous details suggest the music’s teeming surface life in all its protean variety which in turn speaks to a dioptric perspective of Mr Taylor’s extraordinary repertoire itself through the lend of Mr Minasi’s own music.