Home Music New Orleans Swamp Donkeys: Slightly Concussed Live at De Melkbus
There was a time in Jazz history when any musician that looked to the past was considered mouldy fig and that was not a back-handed compliment, but a downright insult, meant to hurt deep inside. But for all those who may say that the African-American invention has strayed so far away from its roots there are The New Orleans Swamp Donkeys and this double-CD Slightly Concussed Live at De Melkbus. One cannot help but notice that the venue (of this album featuring music recorded over 2015 and 2016) is an European one – The Netherlands, to be precise, home of the North Sea Jazz Festival, Den Haag; worth mentioning because it seems once again that the Europeans are selling America’s music back to America once again.

Does that mean that musicians need to go back to the beginning, so to speak? The answer is probably an emphatic “Yes”. After all how can you really know where you’re going if you don’t know where you’ve come from; This is certainly what is practiced here from by the born-to-be-a Jazz musician James Williams, leader and trumpeter of The New Orleans Swamp Donkeys. His claim to fame also includes superb musicianship. And he’s not the only one who advocates for Buddy Bolden, Jelly Roll Morton, Louis Armstrong and the legends who breathed life into The Music; the Georgia-born Wycliffe Gordon, 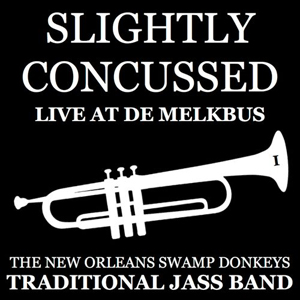 the Brooklyn-born Wessell ‘Warmdaddy’ Anderson, the heavenly-voiced NOLA-based Molly Reeves and the NOLA, Marsalis Dynasty all do just that, and it keeps Jazz alive and spreads the Gospel. So let’s give The New Orleans Swamp Donkeys some richly-deserved love here.

This New Orleans Jazz ensemble with a revolving membership is anchored by James Williams and also includes others such as the sublimely talented guitarist and banjoist Sam Friend, tuba player Wessell Anderson IV, son of Wessell ‘Warmdaddy’ Anderson and the Ibaraki Prefecture-(Japan)-born trombonist, Haruka Kikuchi among others. No matter what incarnation of the band is in attendance the music of the ensemble is just as ravishing as this double-CD proves. The music is – appropriately – culled from New Orleans classic fare such as “Buddy Bolden’s Blues” and “Struttin’ with Some BBQ” but despite the vintage these are each of the other eighteen songs gleam like new and are delivered with vocals by James Williams and Sam Friend with a spontaneous, unaffected Joy with capture this Dutch audience.

Mr Williams and every other musician plays with a stylish exuberance, throwing caution to the winds like the eminent sons and daughters of NOLA past and present. Although this package might seem front-loaded with classics (Disc One appears to have more Blues and Jazz Standards) Disc Two bubbles over with distinctive music too performed in front of these rapt audiences. The trumpeter and the banjoist lead the charge, but with dazzling virtuosity and supreme élan each and every other instrumentalist enables the ensemble to deliver Jazz standards and other pop tunes with uncommon musicality and power, making everything they touch their own. While James Williams and Sam Friend shine bright as they illuminate the songs’ simplest phrases, other musicians shine too. Overall this is a band where showmanship is as natural as musicianship and these performances prove that in the grand manner.