Nothing about this album by Myriad 3, Moons is conventional. It may meld jazz, electronic music and other forms of current pop music. That’s the ‘party line’. More to the point is the fact that it flies in the face of reason and succeeds magnificently in doing so. But other epithets also come to mind: Incandescent, profoundly human and intoxicating in its celebration of the natural force of music. That probably better describes what this fascinating performance is all about. There is no one reason for all of this but there are, well, three individuals who bring a multiplicity of exciting aspects to the music of the group. 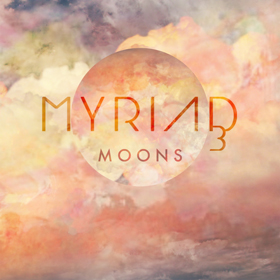 Chris Donnelly is a brilliant pianist, Dan Fortin is a magnificent bassist and Ernesto Cervini is a multi-instrumentalist and ingenious at every instrument he plays. Together it’s more than piano, bass and drums. They create music that challenges one another to untie the complexities of the compositions that are infinitely demanding of its performers and requires special treatment at every turn. And the musicians’ interpretation succeeds superbly by focussing on the life-affirming qualities of the works rather than going in search of the more ceremonial aspects of the pieces. There is genuine urgency in the music, which is also infectiously joyous. Typical of this characteristic is ‘Moons’ which is rhythmically crisp and unfailingly responsive, most effectively in the dramatic twists and turns of its melody.

The performance on this album by all three players mixes wild mystery with coruscating brilliance. ‘Skeleton Key,’ for example, is remarkable and is beautifully shaped by each soloist and captivating in ensemble passages. By adding synthesizers at critical moments in the music the music becomes orchestral, these instruments making it flexible in externalising the drama of the piece in which the synth is used. I have never heard a more compelling performance by a trio in recent memory, nor have I heard one that plays music this contemporary with as much heart in it.

Donnelly’s tempos are on the brisk side, but the sound is never congested and is aided by exemplary almost ‘orchestral’ articulation, care for instrumental detail and some of the most wonderful bass and drum playing you will ever get to hear in a modern trio. There is also superb solo playing on the part of Fortin and Cervini, both of whom are radiant from start to finish. Above all, the performers respond wholeheartedly to the unabashedly expansive way in which each piece communicates its message on this, the third sparkling album of Myriad 3.