Home Music Peter Bernstein: Let Loose
If it says ‘Smoke Sessions’ on the cover, then it has to be significant. The producers, Paul Stache, Damon Smith and Frank Christopher are releasing quite a few recordings, but each of them has as many facets as a gleaming gem. If I may indulge in the metaphor just a little bit longer then, Let Loose by guitarist Peter Bernstein with Gerald Clayton on piano, Doug Weiss on bass and Bill Stewart on drums could well be the Koh-I-Noor diamond of the recent catalogue. And the quartet may only be getting started. This disc features a handful of premier compositions by Bernstein and unfolds in a celebration of from one of today’s admirable guitarists. 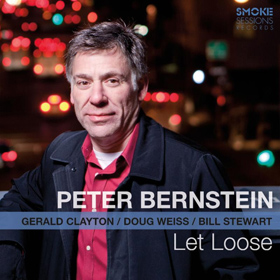 Peter Bernstein has a long history with Stewart and with Weiss, but his relatively with Gerald Wilson is relatively new. Bernstein and Wilson turn these charts into something really spectacular. They reveal an inventive composer who finds a soul brother in Wilson. Indeed these flexibly scored works bridge the stylistic gap between Wes Montgomery and Pat Metheny, melding choral grace with veritable single-note fireworks. This makes for music that is effortlessly idiomatic; embroidered aria-like melodies and romantic solo reflections that give way to sinuous, spirited dancing ensemble music. There’s virtuosity here from all the musicians. Textures are harmonically and contrapuntally rich, yet never clogged.

Peter Bernstein leads the quartet in performances of terrific flair and abandon. Bernstein’s rigorous technique makes light of the actual complexities and weight of his virtuosic writing with its quick-fire flourishes, intricate, high-wire figurations and tricky passages of multiple stopping. ‘Let Loose,’ ‘Hidden Pockets’ and ‘This is New’ are almost heraldic of this stylistic invention by the guitarist’s amazing musicianship. There are, too, moments of eloquent dialogue, often three-way conversations between the musicians, notably in ‘Tres Palabras’ and in ‘Blue Gardenia’. The slender sound of the ensemble is taut and the sound, as usual, is transparent, a generous acoustic adding much warmth to the recording. Liner notes, as is the case with every Smoke Sessions record, are enthralling.