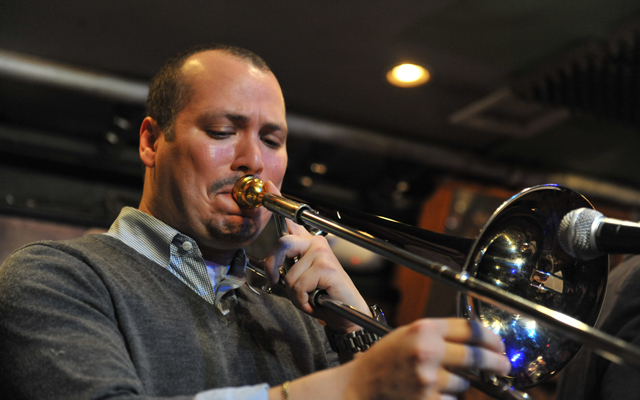 The history of art – any art – has almost always involved the passing down of knowledge about the specific art from generation to generation and sometimes form father to son (as in the most celebrated case of the Bach Dynasty). In music fathers, especially jazz the fathers have been Louis Armstrong, Jelly Roll Morton, Duke Ellington, Fletcher Henderson, Art Tatum, Charlie Parker, Thelonious Monk and John Coltrane, and so on. But musical genetics is not necessarily biological and the genes that beget artful imagination are the connection that one artist has with another from one generation to the other. This is what Michael Dease is trying to establish with his album, Father Figure. The evidence of his historical perspective is present deep under the skin of this music, where notes live until they are set free by the musicians who play them. 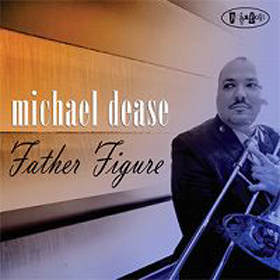 There might be no direct evidence of this on the album track list. Barring Charlie Parker’s ‘Confirmation’ and Grachan Moncur III’s ‘Riff Raff’ no tune gives away the mysterious, almost supernatural connection that Michael Dease has with his musical ‘ancestors’ but these bloodlines exist. And they do in the elemental swing with which each of the tunes swaggers and sings. Swing is, after all, the pulse of blood that pumps its way through the heart of jazz. And Michael Dease’s ability to make a handful of notes do the work of a hundred is all over this music. His bronzed tone graces every solo, providing the creative stimulus for the younger members in the band – including bassist Endea Owens and drummer Luther Allison, as well as others – challenging them to stretch and plant tight rhythms into the melodies and harmonies of each luminous piece.

Father Figure not only fulfills its role in encouraging younger musicians – some of whom Dease taught at Michigan State University – to exercise their chops and playing in the pocket on tracks such as ‘Confirmation’ and ‘Wingspan’. Moreover he encourages them to search for and get in touch with their inner voice, the only guide to ‘playing yourself’ in music. It is interesting to note that the ensemble uses the most difficult (bebop) rhythms to ‘find’ their voices. This is not to say that other music on the album does not show signs of the musicians’ singularity. Listen, for instance, to pianist Glenn Zaleski’s exquisite playing in ‘Till There Was You,’ or Behn Gillece’s vibraphone expedition on ‘Cry of the Wolf,’ or Markus Howell preaching on ‘Church of the Good Hustler’ and Immanuel Wilkins’ marvellous turn on ‘Confirmation’. You’ll find all the clues to the creative stimuli at work in this excellent album that connects the dots between the legacies bequeathed by The Ancestors of Jazz.

Track List: Church of the Good Hustler; Brooklyn; Cry of the Wolf; The Pursuit for Inspiration; Confirmation; Riff Raff; Annette’s For Sure; Marian the Librarian; Wingspan; Till There Was You; Father Figure.